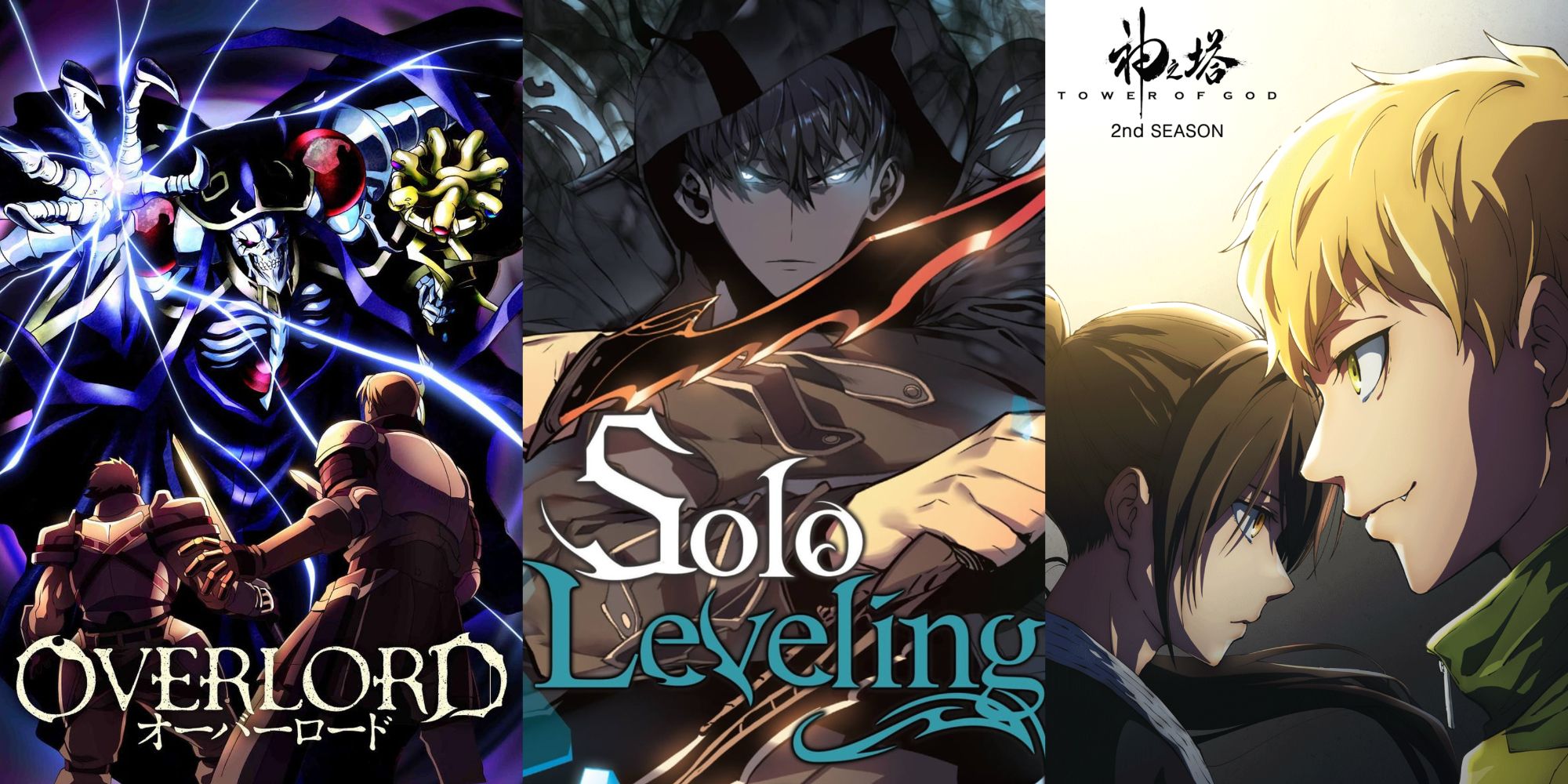 Solo Leveling is a top-tier fantasy manhwa that has fans shaking with excitement, waiting for the anime to drop. The story follows Jinwoo, an E-Rank hunter with little to offer and boundless determination on a journey to become more powerful. While as an E-Rank hunter, Jinwoo is infamous as the Weakest Hunter in the World, he becomes the most overpowered individual as he gains more strength.

RELATED: 10 Things To Look Forward To In The Solo Leveling Anime

A most thrilling Isekai tale, Chugong’s Solo Leveling has everything from spirits and monsters to politics and brotherhood. However, since the anime is yet to release, anime-only fans can keep themselves occupied with equally thrilling anime series while they wait for Solo Leveling.

Ichiro “Sato” Suzuki is a programmer who finds himself transported into a world made up of all the games he was tirelessly debugging in real life. His new world, essentially a fantasy role-playing game, makes Sato younger while giving him little to no time to settle in and find his way.

Death March to the Parallel World Rhapsody follows this exhausted programmer in a world he cannot get out of, but continues to level up to survive. Sato defeats a horde of lizardmen, and his level immediately boosts to 310. Afterwards, he sets out to explore this new world.

Glenn Radars reluctantly becomes a teacher in the most prestigious Alzano Imperial Magic Academy in Akashic Records Of Bastard Magic Instructor. His carefree and easygoing attitude doesn’t sit right with his students, who have nothing but complaints for him.

However, evil stirs in the school, causing Glenn and two of his students, Sistine Fibel and Rumia Tingel, to become entangled in their academy’s political power struggle. As students strive to be the best magicians they can be, they face life or death situations.

8 Cautious Hero: The Hero Is Overpowered But Overly Cautious Proves Heroes Can Be Too Careful

While some heroes are reckless and do whatever it takes to reach their goals, some like Cautious Hero: The Hero is Overpowered But Overly Cautious’ Seiya Ryuguin are careful to a fault, despite being overpowered with marvelous weapons and abilities.

Ryuguin prepares to protect Gaeabrande when the Goddess Ristarte summoned him to her world. Ristarte provides Ryuguin with everything he needs to defeat his foes and protect his new world, but he is always hesitant and too careful. He fights the weakest monsters with the strongest spells, saving the best for last.

Sadao Maou is a part-time worker at MgRonald’s in Japan, where he fled after he lost the battle in Ente Isla. As he adapts to the human world, Maou dreams to rise to a prominent position within the corporation and take over the world. The Devil is a Part-Timer is an Isekai anime with great potential.

While learning to be a responsible citizen of the human world, Maou protects civilians from the threats who come to fight and kill him. From desperate heroes and menacing villains to cute kids and a beach episode, this anime has everything a fan could ask for.

6 Attack On Titan Depicts War In Its Entirety

Hajime Isayama’s Attack on Titan is one of the most gruesome and thrilling stories in shonen anime. Eren Jaeger loses his mother to a Titan in the first episode, and everything goes south from there. He swears to end all Titans but ends up becoming the thing he despises the most.

RELATED: 10 Anime Villains Who Are Afraid Of Their Own Powers

Eren wages war and plays both sides like a true mastermind who knows what is going to happen. The anime portrays the struggles of both the warring sides, along with the politics and emotional turmoil that follows.

5 The Rising Of The Shield Hero Portrays Heroes’ Many Struggles

The Waves of Catastrophe threaten the Melromarc kingdom’s peace in The Rising of the Shield Hero. Four civilians from Japan find themselves in Melromarc as the Four Cardinal Heroes, in charge of keeping the Waves at bay and maintaining tranquility and order in the kingdom.

Each hero has a sword, spear, bow, and shield, which helps them to defeat the Waves of Catastrophe. While fans think that the manga has already aged poorly, anime-only fans are more hopeful regarding the protagonist Naofumi, and his endeavors.

4 Is It Wrong To Pick Up Girls In The Dungeon? Has Monsters In Every Dungeon

Gods and humans coexist in the lively city of Orario in Is It Wrong to Pick Up Girls in the Dungeon? Bell Cranel, the main protagonist, is a naïve young man with big dreams, hoping to become the mightiest adventurer.

Cranel meets the lonely goddess, Hestia, who takes him closer to his goal, a feat he couldn’t accomplish by himself. This anime series has more to offer than dungeons, monsters, and a determined main character. All kinds of wins, losses, and everything in between await Bell.

A game Isekai of the best quality, Overlord has made a lot of noise in the anime community with the onset of its fourth season. The anime follows Momonga, a veteran gamer, through the terminal moments of the virtual reality game Yggdrasil.

However, when the game is supposed to go offline, Momonga finds himself trapped inside with the few other players who remained to witness its last moments. As the in-game characters develop their own personalities and attitudes, Momonga gathers the other players and begins exploring his surroundings, determined to get out.

2 Demon Slayer Follows A Determined Hero On A Righteous Path

Ufotable’s Demon Slayer is one of the most popular shonen anime series worldwide. A wide range of heroes and villains with incredible powers and moving origin stories make the tale an immersive experience for fans. The series’ protagonist Tanjiro Kamado is on a mission to find a cure for demonism and reclaim his sister’s humanity.

As Tanjiro trains to become a Demon Slayer, his sister explores her demonic powers. The two work together to fight demons and get closer to the Demon King, Muzan Kibutsuji. Fans await the series’ next season with unabated excitement.

Tower of God is an anime adapted from SIG’s manhwa of the same name. The Tower of God summons people, called Regulars, and grants them whatever they wish for as long as they reach the top. Bam follows Rachel, the literal light of his life, to the Tower, where she insists she must go.

Although the Tower didn’t summon Bam, he goes all the same, determined to stick with Rachel. Bam somehow opens the gates by himself out of sheer will. His kind, called Irregulars, is rare. The story follows Bam on an impossibly unique journey.

NEXT: 10 Anime Characters With Blood-Based Powers