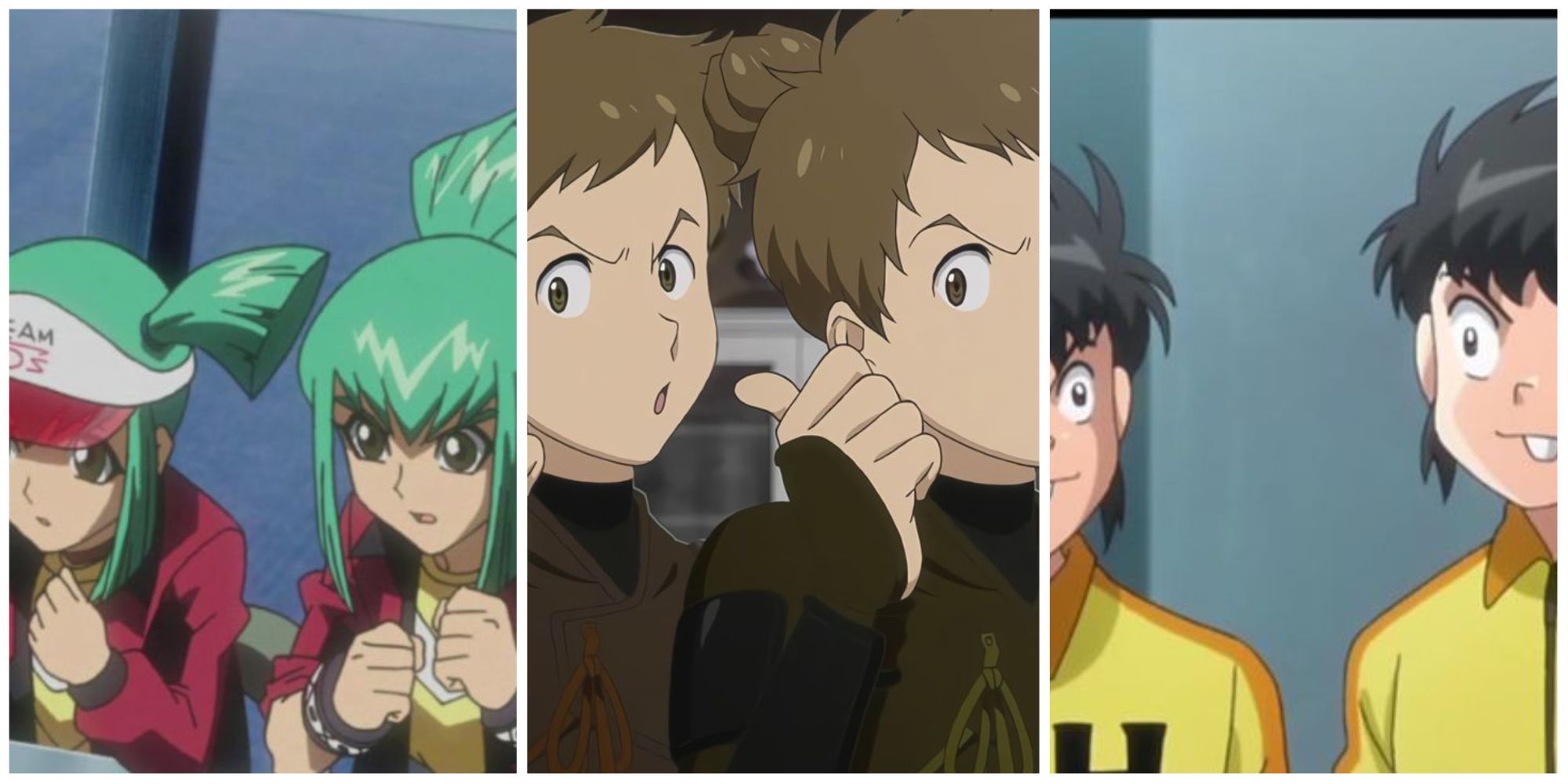 Twin siblings are a curious natural phenomenon. Two humans sharing their mother’s womb for nine months and being born within minutes of each other is neat. They might look alike, but they might not. Twins occur in anime as well, and they can be a highlight of the show.

Twins in anime are often super strong. Some are of one mind while others complement each other in other ways. Some twins add to the cuteness factor of a show. Other times, they bring the laughs with wacky antics. Whichever type of twins are in an anime, they are usually the gift that keeps on giving.

Beyblade Burst is the latest in the Beyblade franchise. In the early parts of this series, Valt Aoi rises through the ranks of Beyblade to reach the top. His first supporters are his brother and sister, Nika and Toko, who are twins.

Nika and Toko are both adorable, especially when cheering on their big brother. In the third series, Turbo, Toko even gets his own Bey: Spiral Treptune. He is presumably one of the best bladers at his school. Nika and Toko are snarky kids who always get the last laugh.

Fena: Pirate Princess is a 2021 collaboration between Crunchyroll and Adult Swim. It is about Fena Houtman, a girl who was separated from her family and friends and rediscovered on an island. She is in search of a place called Eden, which her father had told her about. Fena is accompanied by several warriors who have sworn allegiance to her.

Two of Fena’s warriors are Enju and Kaede, who are identical twins. They are energetic and always trying to get girls. The two are also quite adept at using a spear. Enju and Kaede are single-minded. They’re almost like one person in two bodies. Even so, they’re not people to be trifled with.

8 Hideyoshi & Yuuko Are Both Competent Students (Baka And Test)

Baka and Test follows Class F at Fumizuki Academy. At this school, students are placed based on their entrance exam results. The lower the scores, the worse the facilities the class gets to use. However, there are things called Summon Battles where, if a lower class defeats an upper class, they trade facilities. The summoned beings’ attributes depend on test scores.

The human characters in Bleach don’t get much of a spotlight outside of filler episodes. This includes Ichigo’s sisters, Karin and Yuzu. With all the battles being supernatural, Ichigo’s human friends are not seen as important to the story due to their lack of spiritual abilities.

Karin and Yuzu may have some spiritual powers from their parents, but they didn’t awaken in Bleach proper. Yuzu is the caring one who is always looking out for her family. Karin, on the other hand, is stoic and keeps her feelings inside. Both are supportive of Ichigo, even though they’re not quite aware of what he goes off to do sometimes.

Toward the end of the original Naruto series, Sasuke left the Leaf Village with a group of Sound ninjas. Among them was the shinobi Sakon. Sakon eventually had to fight Kiba and fought him alongside his twin brother, Ukon, who was part of his body.

Sakon and Ukon used a number of deadly attacks on Kiba and Akamaru. It got to the point that Sakon and Ukon’s cellular regeneration was too much for Kiba and his canine companion. It took a rescue from Kankuro and his puppets to turn the tables and do them in.

Ouran High School Host Club was a 2000s anime about Haruhi Fujioka, who breaks an expensive vase and is forced to work in the school host club. Hilarity ensues once the club realizes the student is a girl. The show follows Haruhi’s relationships with the various boys in the host club.

Two of the boys are twins: Hikaru and Kaoru. They use their twin magic to benefit their work at the host club. They’re a fun pair who know how to get under the other’s skin. They have an issue with people not being able to tell them apart, however, which annoys them. They want to be individuals, but being identical interferes with that.

Captain Tsubasa is an anime from the 1980s that centers around Tsubasa, a boy who is obsessed with soccer. He would constantly talk to and dribble his soccer ball. The ball even saved his life once. Tsubasa was on a mission to be one of the best soccer players in the world.

During Tsubasa’s junior high years, his team encounters Kazuo and Masao Tachibana: twin brothers and excellent soccer players. They work like a well-oiled machine thanks to good old twin magic. They are of one mind. This is not only their greatest strength — it’s their greatest weakness as well. They are easily deterred if they’re not in sync.

Yu-Gi-Oh! 5D’s is the third series in the Yu-Gi-Oh! franchise. As silly as card games on motorcycles seemed at the time, the series had a cool style and intense duels. Among the main characters was a pair of twins: Leo and Luna.

Leo is the overzealous one and always comes up with schemes to help Yusei out. Luna is the more collected of the pair. Luna is one of the signers and a good duelist in her own right. The pair were mostly indoors before the start of Yu-Gi-Oh! 5D’s and their parents were rarely around. Nonetheless, they support Yusei in his endeavors and are full-fledged members of the crew.

Blue Exorcist experienced a surge of popularity in the 2010s. It had cool fights and a protagonist that, despite being the child of Satan, was willing to fight that heritage for the sake of humanity. Protagonist Rin and his brother, Yukio, are some of the best exorcists at the Academy.

Rin and Yukio fight demons for the sake of their late adoptive father, a Catholic priest. Despite being the sons of Satan, they identify more with their humanity and fight alongside their human classmates to exorcise demons and protect the human world.

Androids 17 and 18 from Dragon Ball Z are two of the most formidable fighters in the series. Whether they were on the side of good or evil, they could go toe-to-toe with just about anyone. What fans may not realize is that the androids are twins.

Android 18 went on to marry and have a child with Krillin. Even after these changes, Android18 was still a powerful fighter. Android 17 went on to be a park ranger and would take care of various animals. In Dragon Ball Super,Androids 17 and 18 would participate in the Universal Survival tournament. Android 17 would even be the last person standing when the dust settled. Androids 17 and 18 are some of Goku’s best allies.

NEXT: 10 Shonen Anime That Disappointed Fans