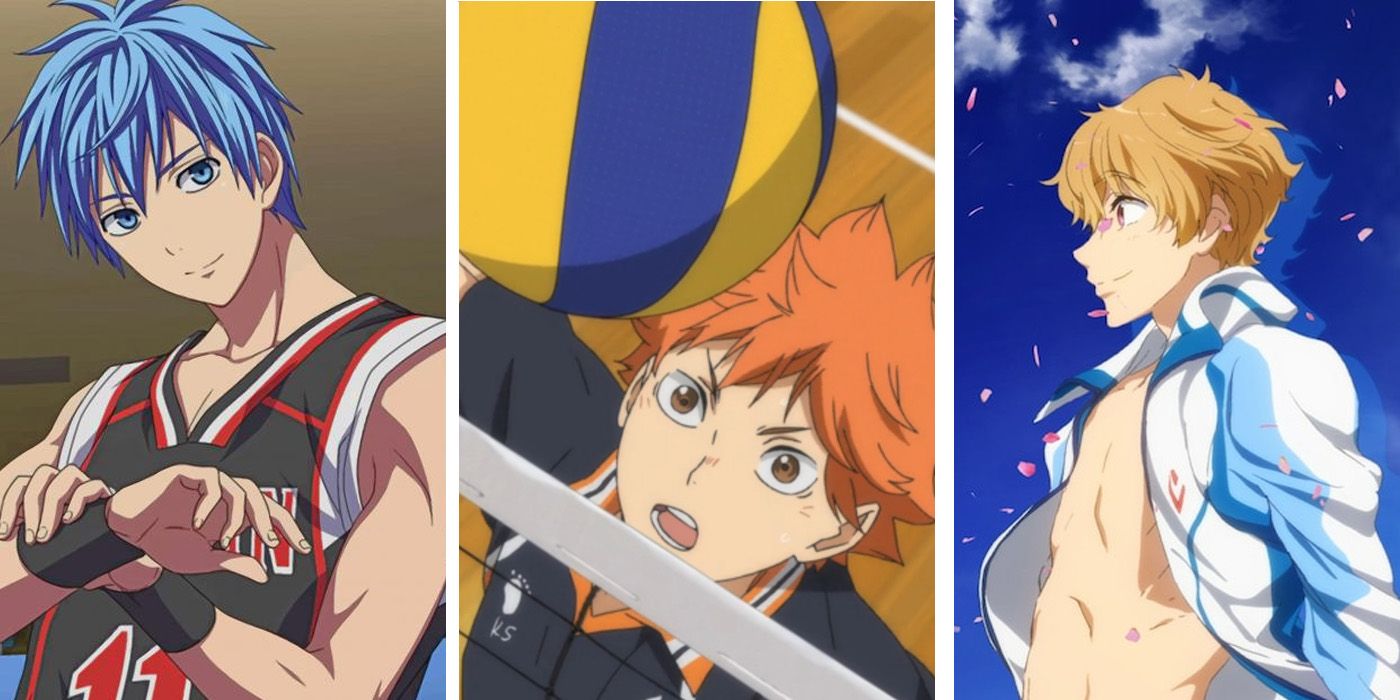 Sports anime have risen in popularity over the years, with series like Haikyu!! and Kuroko’s Basketball at the forefront of favorites. Still, there are plenty of sports anime to watch and love, with themes based around a passion for their chosen sport and a determination to achieve their goals keeping them well-loved.

RELATED: The 10 Most Well-Written Sports Anime Of All Time

Shoyo Hinata, the main character from Haikyu!!, is one of the more popular sports anime protagonists due to his golden personality. Hinata is an aspiring wing spiker who is determined to become his team’s ace. His uplifting, positive attitude constantly encourages fans to try harder and do their best just like him.

Hinata is hard not to love, and his bubbly personality is only made better by his determination to improve himself. He’s a constant ray of sunshine in the series, and one of the few characters who rarely doubts himself.

Kuroko’s Basketball simply wouldn’t be the same without Tetsuya Kuroko on the team. Kuroko, the main character, is most notable for not being a stand-out star despite his impressive talent. Instead, Kuroko firmly believes in supporting his team and always strives to do what’s best for the team rather than for himself.

Kuroko respects all of his fellow players, and it’s understandable why so many fans admire him. Plus, while he is often calm and rational, he does occasionally show a sillier side of himself, which only makes him more likable. He’s an admirable, honorable person both on and off the court, and believes in his fellow players completely.

8 Hiruma Is A Driven Athlete (Eyeshield 21)

Yoichi Hiruma from Eyeshield 21 is a standout for being a fan-favorite character from the popular American football anime. In this series that revolves around athletes with outrageous physical talent, Hiruma is notable for not having any remarkable abilities. Instead, he is able to keep up with his peers by working hard and using his brain.

Even in the anime, all the characters respect his drive, and it’s the same for fans. He’s an inspiring player who does everything he can to reach his goals, so it’s not hard to understand why he’s a favorite.

Yuri Katsuki is working hard daily to become a better figure skater in Yuri!! on Ice. Yuri is extremely relatable for fans in the way he’s depicted, especially at the beginning of the anime. He was down-in-the-dumps over his skating performance.

Yuri was essentially a retired athlete who had given up on his dreams — at least until Victor Nikiforov showed up. Yuri is an interesting character who’s both riddled with self-doubt and trying his hardest to be successful. He’s admired by fans because of how relatable and driven he is.

6 Takemaru Is Talented But Egotistical (Hajime No Ippo)

Mamoru Takemaru is a competitive, world-champion boxer who mentors Ippo in Hajime no Ippo. While it initially seems like he’s only a silly athlete constantly playing pranks and pulling off elaborate stunts in the ring, fans realize he’s a truly gifted boxer when the going gets tough.

Takemaru cares a lot about winning, and his drive be the best helps make him a fan-favorite character. Overall, he is a strong, talented, but slightly egotistical boxer who’s entertaining to watch in the ring.

Nagisa Hazuki, one of the main characters from Free!, is one of the happiest, most optimistic characters in sports anime. He’s most notable for his constant positivity, even in the face of unpleasant circumstances. More than that, he helps hold his team together with his uplifting attitude and cute, funny antics.

Nagisa is never afraid to speak his mind and share his enthusiasm for swimming, both with fans and his own teammates. Plus, his trouble-making side compels him to do things like sneak into off-limit pools, which only makes fans love him more.

4 Reki Is Passionate But Self-Critical (Sk8 The Infinity)

Reki Kyan is the easily lovable main character obsessed with skateboarding from Sk8 the Infinity. He’s beloved by fans for his goofy, positive attitude that has been shown to hold a darker side underneath.

RELATED: 10 Sports Anime That Were Better Than Expected

While Reki outwardly appears extroverted and bubbly, he’s also riddled with self-doubt, which only makes him more interesting. Reki constantly tries his best and his passion for skateboarding is contagious to fans. It’s hard not to love him when he’s constantly picking himself up no matter how hard it feels.

Miyuki Kazuya, the captain and catcher in Diamond of the Ace, is a character that both fans and other characters alike can’t help but love. While he’s often arrogant and overly serious, it’s clear he also hosts an incredibly strong determination to win with his team.

Kazuya cares a lot about his teammates and always has their best interests in mind, though he isn’t afraid to be disliked with his strong opinions. Overall, Kazuya’s well-liked for how reliable he is, and his desire for his team to be the best. Plus, fans love watching him grow more confident as the series progresses.

Sakamichi Onoda from Yowamushi Pedal, is initially a shy, easily embarrassed member of Sohoku High’s Bicycle Racing Club. While this doesn’t change much throughout the series, fans also come to learn about his intense determination to complete goals, even those that are deemed impossible by his teammates.

Sakamichi’s courage and abilities keep growing, turning him into a fierce bicyclist. While his personality is undeniably interesting, fans can’t help but appreciate another passion of Sakamichi’s — anime. It’s a passion that anime fans can relate to all too easily.

1 Oikawa Is The Character Fans Can’t Help But Love (Haikyu!!)

Toru Oikawa is from an opposing team in Haikyu!!, but is still a fan-favorite for his entertaining personality. He comes across as harsh and narcissistic, and it’s not an untrue description of him. However, fans learn he has a softer side that just wants to do his best, which helps with fans’ admiration.

Overall, Oikawa is a character that fans hate to love but is undoubtedly a fan-favorite. Whether it’s because fans love his standoffish, narcissistic personality or just because of the deeper implications of his backstory, he remains a fan-favorite for many.

NEXT: 10 Best Sports Anime That Need A New Season