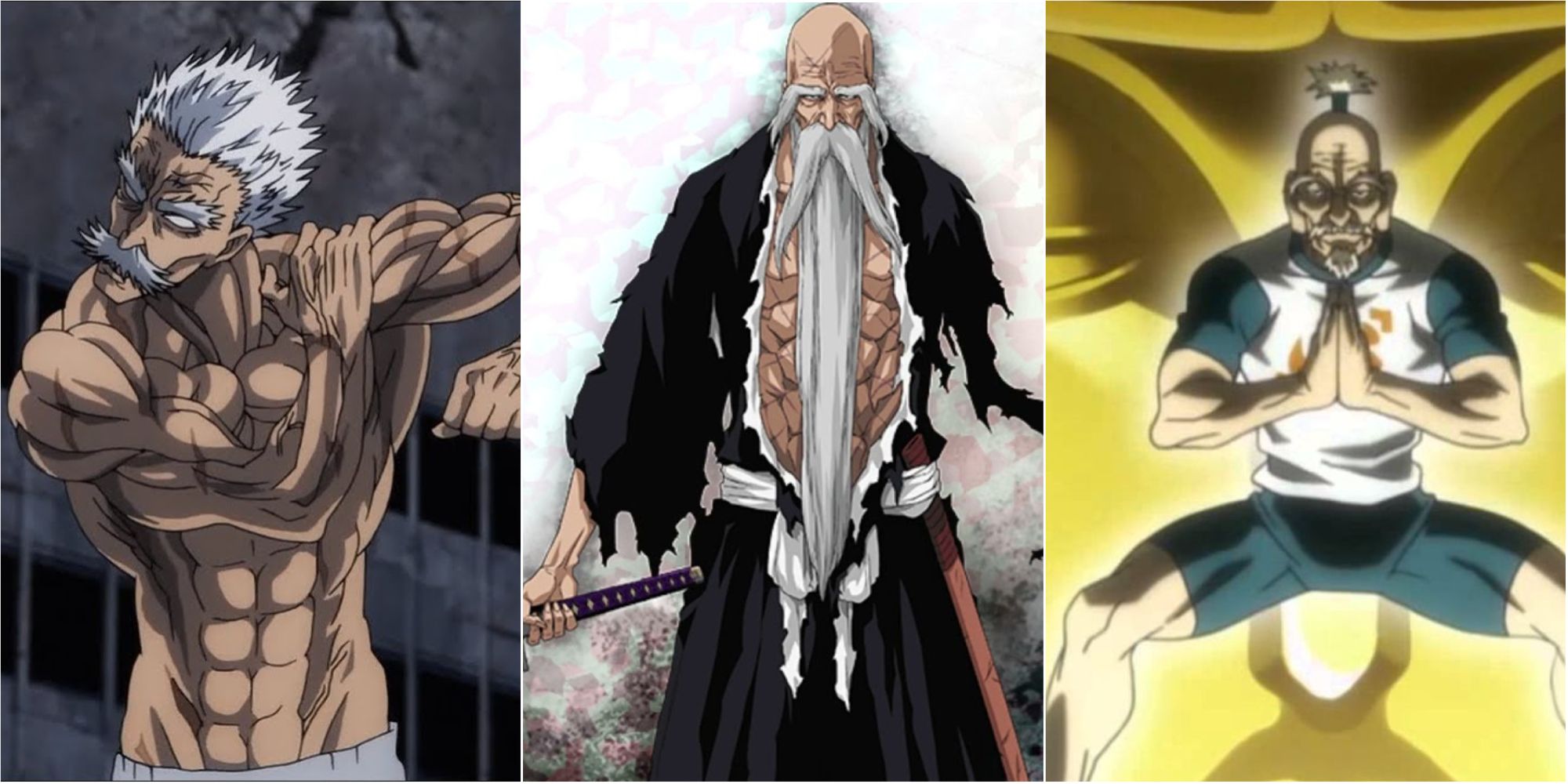 Anime plays host to a multitude of characters who, despite possessing superhuman abilities, also possess physical appearances that do not reflect their exceptional capabilities. This is a recurring theme within the shonen genre of anime, and it serves to add a layer of excitement to a character and their actions.

The powerful old men of anime are a good archetype of this popular theme. In most cases, they are seen possessing unusual quirks and unique personalities, but when they get serious, not many can stand in their way. They are individuals who may seem unremarkable at first sight but are sure to leave a lasting impression after displaying their astonishing strength. Following this popular archetype, these are some absurdly powerful old men in the anime franchise.

Gintama is a shonen comedy anime about aliens and samurai with a humor-oriented take on almost every part of the show.. However, at its best, it is a show with engaging storylines and multiple powerful antagonists, one of which was the humanoid alien named Housen.

Housen was a former division leader of the Harusame Space Pirates, one of the most powerful alien groups in the world, and was also known as the King of Yato, an alien tribe well known for their outstanding physical strength and innate talent for battle. He possessed an absurd number of additional abilities including invulnerability and accelerated healing, and was considered one of the strongest beings in the galaxy.

Sarutobi was a shinobi who acted as the third Hokage of the Hidden Leaf Village, a position usually occupied by the strongest ninja in the village, serving as the ruler and defender of the land. He was much more proficient in battle during his younger years, but even with age, he still managed to put up a fight against some of the strongest individuals in the Naruto series.

This powerful ninja was known to be able to imitate any ability he came across and was also responsible for creating brand new techniques of his own. He could wield the power of multiple elements and had precise control over them, sometimes combining two or more with remarkable results. As his final act, he manages to seal away reincarnated versions of the first two Hokage and drive off the incredibly powerful Orochimaru, effectively protecting the entire village despite his old age.

The world of One-Punch Man is filled with several powerful characters and unique personalities. It is famed for its protagonist, who can eliminate any threat while exerting minimal effort. However, it also features side characters with impressive abilities who keep the story interesting through their more challenging battles. The anime is made up of heroes and villains, each fighting with their own goals, and Bang is no different.

Bang is an S-class hero, a title reserved for individuals with outstanding strength that stand above regular heroes. He is a highly skilled martial artist known to be the best S class hero with regards to fighting ability alone. Despite his age, he possesses an outstanding physique and tremendous physical strength, displayed on many occasions, such as when he is seen destroying fragments of a meteor with his bare hands.

The Dark King, Silvers Rayleigh, is an old man and the former vice-captain of the Roger Pirates, one of the most famous pirate groups ever to traverse the seas of One Piece. The anime is rich with history, containing phenomenal worldbuilding and multiple interesting characters. As an important figure in the story’s vast history, being a close associate of the late Pirate King, Rayleigh is an individual who possesses immense strength despite his old age.

Rayleigh is capable of fighting on equal footing with the world’s strongest powers, as seen when he faced off against Admiral Kizaru in the Sabaody Archipelago. Furthermore, he possesses frightening levels of endurance, being able to travel between islands by swimming alone while fighting off dangerous sea beasts with his bare hands simultaneously.

Makarov Dreyar is the eccentric Guild Master of the Fairy Tail Guild in the Fairy Tail anime series. This old man of extremely short stature is generally friendly and cares deeply about his guild members. However, he is not afraid to use brutal force if he feels the need to set things right. He is also a member of the Ten Wizard Saints, a title bestowed upon the strongest mages of the continent.

His most famous ability is Giant, a power that allows him to enlarge himself, once even reaching the size of an island. However, despite his repeated use of Giant, his most powerful magic is Fairy Law, a Legendary Magic that targets beings the user believes to be enemies and inflicts life-threatening damage to them.

Being the grandfather of Killia Zoldyck, a more prominent character of the Hunter x Hunter anime, Zeno Zoldyck is one of the oldest and most experienced members of the Zoldyck family of assassins. Despite the nature of his profession, he takes pride in avoiding unnecessary casualties and possesses a relatively easy-going personality.

He is an extremely skilled nen user and has managed to corner some of the series’ most powerful individuals. His most common and powerful use of nen manifests in the form of a golden dragon with multiple destructive capabilities. The dragon works as an extension of his body that he can direct at his targets in many different forms, each possessing a remarkable amount of force.

Netero is the second Hunter x Hunter character in this list and is even stronger than his previously listed counterpart. In addition, he served as the chairman of the Hunter Association, an organization responsible for licensing some of the most powerful individuals in the world.

The former Hunter Association chairman was once considered the strongest nen user in the entire world. Despite his old age, he was still capable of immense speeds and possessed a multitude of special characteristics. His most powerful technique was the 100-Type Guanyin Bodhisattva, a nen ability that utilized his inconceivable speed to perform devastatingly powerful attacks on his target.

Edward Newgate was considered to be one of the greatest pirates of his generation, being the captain & founder of the legendary Whitebeard Pirates. He was one of the very few to be able to match the Pirate King in battle, a feat that earned him even more fame. Despite being aged and relatively weak compared to his younger self, he still managed to stage a full-fledged assault on the Marine headquarters, Marineford.

Whitebeard possessed strong armament haki as well as astounding physical strength. He was capable of causing tsunamis and earthquakes with his catastrophic devil fruit powers and was said to have the power to destroy the world. Even before his death, he was generally referred to as the strongest man in the world.

Muten Roshi, though more commonly referred to as Master Roshi, is a recurring character in the Dragon Ball franchise. Despite his odd and perverted nature, he acted as Goku’s mentor during his earlier years. He is even responsible for inspiring Goku’s signature move he is known for today; the Kamehameha.

Despite his old age and somewhat unseemly actions, Master Roshi is still considered one of the strongest humans in the world. He possesses a naturally short stature, but in his full-powered form, he is capable of performing his regular abilities with enhanced efficiency, as seen when he used his Maximum Power Kamehameha to destroy the moon.

This Gotei 13 Commander has strength that knows no bounds. It is said that for over a thousand years, no Shinigami was able to match him in battle, a fact implied by Yamamoto himself. Yamamoto is one of the strongest swordsman in the soul society, and his Bankai was said to be capable of destroying the entire society.

Yamamoto has an outstanding physique and remarkable strength, but those features do not even begin to cover his vast number of impressive abilities. He can suffocate opponents by looking at them alone due to his outstanding spiritual power. He can also cut massive structures and people with unreal precision due to his peerless talent for swordsmanship. Yamamoto’s Zanpakuto is also the most impressive in the soul society, possessing the ability to incinerate anything that comes into contact with it.