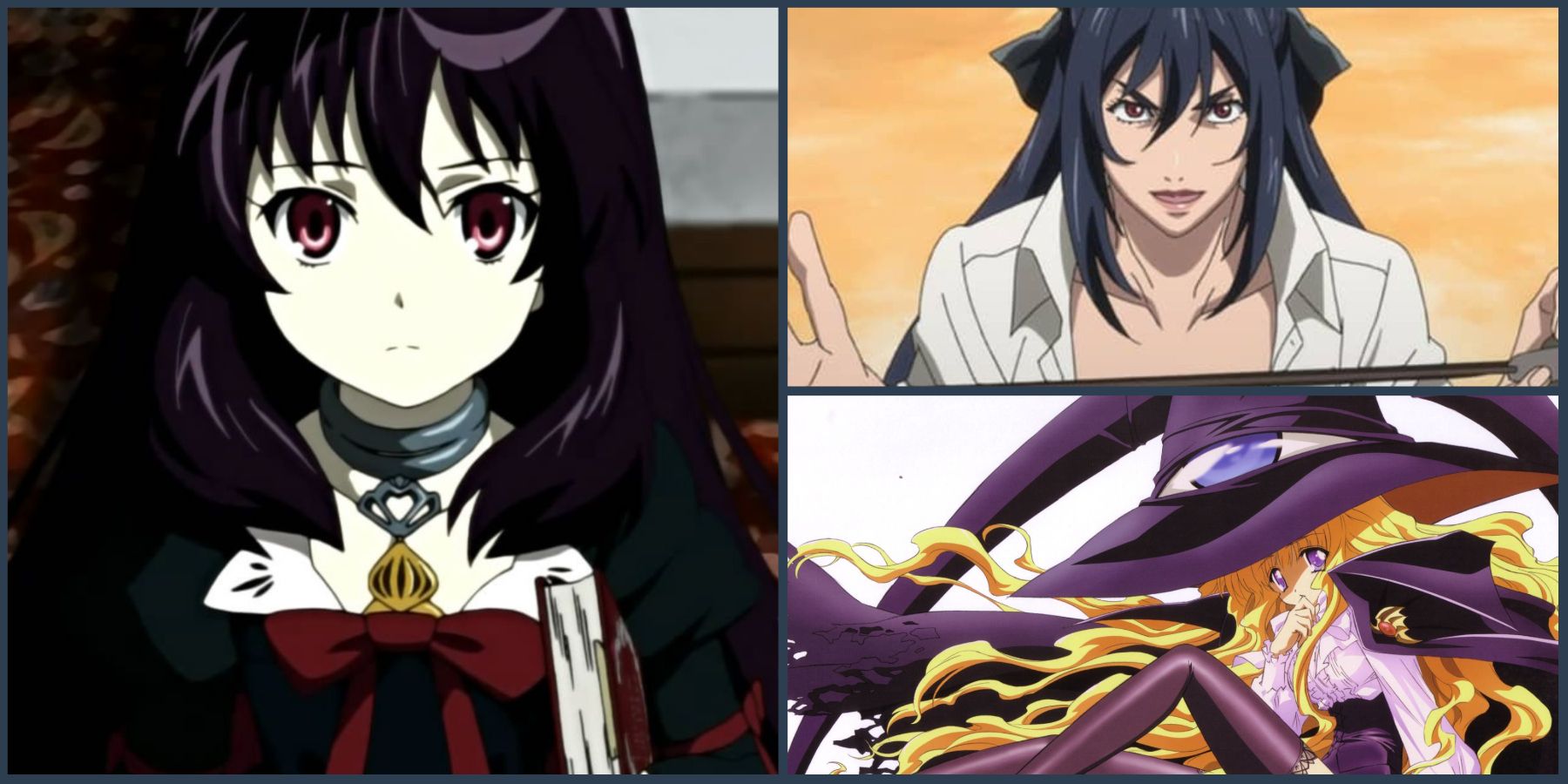 Working at a library might not sound like a flashy job. If anything, it would sound pretty boring or uneventful compared to most jobs in the anime world. One might think there wouldn’t be any fighting or drama going on in a library, a place known to be quiet and tranquil. But the world of anime proves it can add some action to it as well as having great characters that work in it.

These librarians aren’t typical, run-of-the-mill workers just stacking books or standing at the front desk. Some of these librarians pack some serious power, have deadly weapons, and the brains to do their jobs. Anyone trying to sneak a book out of their libraries might want to think twice before doing so.

10 Beatrice (Re: Zero – Starting Life In Another World)

Beatrice was the former caretaker and librarian of the Forbidden Library at Roswaal’s Manor. She has watched over for centuries and has remained unwavering in her duty. Some have tried to take her out of the library or use her for her powers, but none were successful. The library is said to be the most knowledgeable place in Lucigna and the Witch of Greed stored all of her knowledge within it. Beatrice was specifically made to guard it until “That Person”/Subaru comes for her.

She stayed at the library for centuries until it was destroyed in Arc 4. After this, she became Subaru’s contract spirit and has been sticking with him since.

This is one librarian with a deadly set of skills. Mattalast is a First Grade Librarian and one of the five strongest Armed Librarians. He has his trusty two guns, a revolver and anti-tank rifle, at all times and is known to be very deadly when using them. His special ability also lets him see two seconds in the future which comes in handy while he’s in combat. Though he’s lethal, he is a pretty easy-going guy, but is known to be a liar.

Plus, he just looks so dapper in his tuxedo that he normally wears along with his bowler hat while smoking a pipe. Not many can pull this look off, but Mattalast can and looks good.

8 Lilith (Yami, the Hat, and the Travelers of the Books)

The caretaker of the Great Library, a library where different worlds are stored in books. Lilith flirts with both men and women, but usually flirts with Hazuki a lot even though she’s turned down every time. Though it seems like she only cares about herself and her own goals, Lilith is compassionate when it comes to helping children. She dislikes Eve, one of the former caretakers of the library, because she abandoned her duty just to play in other worlds and wants her to return.

Lilith is also pretty powerful and her magic allows her to travel freely into other worlds as she searches for Eve. She’s also able to summon demons and use their souls as she wishes, making her quite the powerhouse. Plus, her hat not only looks huge and cool, but it’s also sentient.

One of the main characters in Library War. Atsushi is very loyal to his duties as a member of the Library Task Force. He’s ranked as Librarian Second Class and is responsible for recruit training, having trained Iku Kasahara. Though it seemed like he singled her out just to pick on her, he pushed her because she reminded him a lot of himself back when he started. Seeing her determination did pain him, but he eventually let up on her.

He is a strict, but fair leader and pushes all of his subordinates to give it their all. His combat skills are top-notch and he’s one of the strongest members in the group despite his short height at 5’5.

6 Dalian (The Mystic Archives Of Dantalian)

Known as the Black Biblioprincess, Dalian is the keeper of the Bibliotheca Mystica de Dantalian, a library that houses 900,666 magic books known as Phantom Books. She is a lot older than she appears and believes she’s a lot more knowledgeable than most people she meets. Very rarely will she praise others and usually praises those that show more wisdom than her, but usually in an arrogant manner.

Dalian helps Huey investigate incidents that revolve around the Phantom Books and become the new Keykeeper. She also has a weakness for sweets which is unusual since she comes off as very judgemental and almost mean most of the time.

A man that was the teacher for 9th Grade Class 3 over 20 years ago before the series. Though he survived the curse, Tatsuji opted to be the school’s librarian and has been keeping records of the curse ever since. After the teacher of the current Class 3 dies, he takes over and helps Kouichi and Mei as they look for something to help them end the curse.

After watching the curse at work for decades, Tatsujji has become hardened and very serious to the point that he’s not the easiest man to get along with. But he’s willing to help the students as much as he can and saves a few of them from being killed by either other classmates or people outside of school.

She might have the appearance of a child, but Cardinal is actually the embodiment of the Cardinal System. After her defeat in the battle with Quinella, Cardinal retreated and took over the Great Library Room. To prevent Quinella from entering, Cardinal destroyed the only door that could access it, but she was able to create backdoors to send out her familiars or let others from the outside in.

Cardinal was the one who taught Eugeo and Kirito how to use the Armament Full Control to defeat Quinella. She would join them along with Alice Synthesis Thirty in the final battle against Quinella, but sadly died during the battle.

3 Hamyuts Meseta (The Book Of Bantorra)

Another character from The Book of Bantorra, Hamyuts is the Acting Director of the library where she works alongside Mattalast Ballory. She’s a first class Armed Librarian and is considered the strongest Armed Librarian. During her childhood, Hamyuts was experimented on and this left her with loving pain and finding someone to kill her in battle. Though a bit cold-hearted with a lust for battle, Hamyuts is pretty easy-going most of the time outside of battle.

Like Mattalast, she has her own trusty weapon: the sling. It might not be flashy, but it’s a very deadly weapon in her hands. With this weapon, Hamyuts is able to throw large or small objects that are 5 times the speed of sound.

One of the main protagonists of Library War along with Atsushi Dojo. Iku is a young woman who is extremely protective of books after being inspired by a Library Defense Force member (later revealed to Atsushi Dojo) saving a book for her. She has a strong sense of justice and is willing to disobey orders if she feels they’re wrong. She’s willing to put her life on the line to protect books, but that bravado does lead her to making mistakes. Though she makes a lot of mistakes, Iku’s determination and hard work does pay off and she becomes a Library Clerk First Class.

She was a member of the track and field team in her high school and has great stamina that allows to keep up with even vet Library Defense Force members. Overall, Iku is a tough young lady, but has a heart of gold that makes her excellent at her job.

1 Ireia Kitty (The Book Of Bantorra)

Another awesome librarian from The Book of Bantorra. Ireia is the oldest Armed Librarian and the one in charge of training Librarians. She’s also one of the five strongest Librarians even at her old age. If that doesn’t make her sound intimidating, she’s a master at hand-to-hand combat and has enormous strength, being able to lift large and heavy objects with no problem. Luckily for present-day enemies, Ireia only fights when absolutely necessary due to her older age. But she was considered one of the deadliest and strongest Librarians back in her prime, showing she’s not one to mess with.

Her kind and caring personality has made her one of the most beloved Armed Librarians. She’s mostly a mother-figure to those around her and most Armed Librarians trust her.