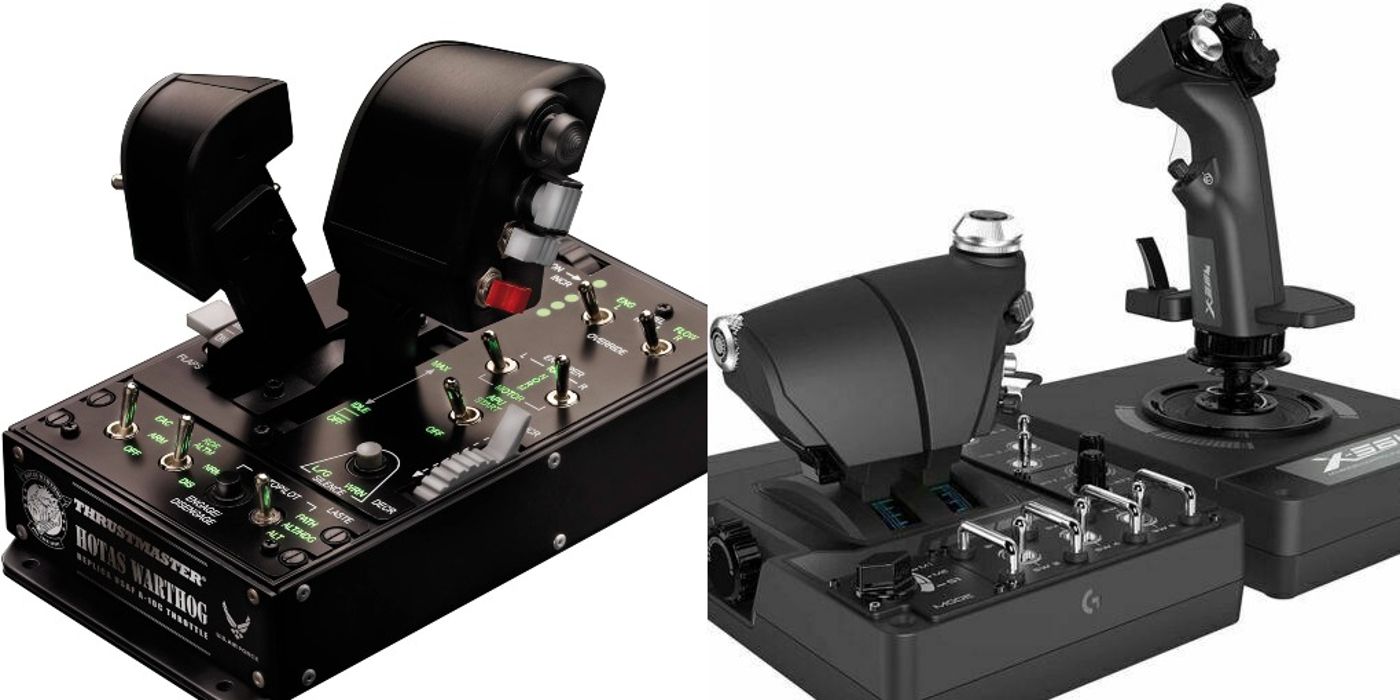 As every expert PC flight gamer in 2022 knows full well that utilizing the proper hardware makes all the difference in the world in terms of achieving the most optimal playthroughs. One of the most integral tools regarding a PC flight simulator’s success is the joystick, or hands-on throttle-and-stick (HOTAS), which allows players to wield full control of their aircraft in the most viscerally realistic ways imaginable. The better the HOTAS, the smoother the gamer’s flight path will inevitably become.

As such, those looking for the best and most effective HOTAS to use in 2022 are in the right spot to find the right joystick for beginners, mid-level, and expert gamers alike.

At an affordable price of roughly $70, the Thrustmaster HOTAS One is one of the best tools for new PC gamers looking to learn the ropes of flight simulation. The build quality may leave something to be desired, but the adjustable stick tension knob and extremely simple-t0-use mechanics make it a must-have for novices.

With a detachable base, dual rudder system, countless buttons, switches, and triggers, and easily pairable or separable stick and throttle setup, one of the best aspects of the HOTAS one includes the Z-axis rotation and left rudder control, giving gamers more freedom to soar among the heavens when playing the most popular flight sim games like Star Wars Squadrons.

For those looking for an effective yet affordable HOTAS, the Thrustmaster T.Flight HOTAS is easily the best budget PC joystick on the market. At a cost of $65 on Amazon, what the joystick lacks in shiny baubles, buttons, and hats it more than makes up for with its awesome detachable throttle and a much-needed Z-axis rotation and left rudder control.

While the apparatus is made of plastic and doesn’t look as cool or high-tech as some of the more advanced joysticks, the Thrustmaster HOTAS X is perfect for beginners who want to learn the ropes of flying without breaking the bank.

PC gamers who focus specifically on Boeing aircraft simulators would be wise to obtain the Thrustmaster TCA Yoke Pack Boeing Edition. With lifelike authenticity, the yoke and throttle combo pack boast the same precise tilting and pendulation of a real Boeing 787 Dreamliner airplane by using a yoke and stick that pivots back and forth on a hinge. The result is incredibly smooth yet stable, easy to control, ergonomically sound, and a ton of fun to play with.

Aside from differentiating from the annoying push-and-pull yoke system of most HOTAS, the swappable levers allow for ambidextrous gameplay, enabling players to have more freedom in the air. Ideal for long-haul flights devoid of gun battles on games like Microsoft Flight Simulator, the Thrustmaster TCA Yoke Pack Boeing Edition is worth every penny of its pricey cost, which is its only real downside.

Although officially designed for PS4, the Hori HOTAS Flight Stick is compatible with PC games like Microsoft Flight Simulator and other acclaimed flight games like Ace Combat 7. Beyond the portable latitude, the throttle-and-joystick combo has a rare rumble vibration function that increases the authenticity of flight sims regardless of which game is played.

Beyond the functionality and gorgeous aesthetic design of the hardware, PC gamers will be relieved by the adjustable joystick sensitivity and throttle resistance, allowing fliers to properly tune the controls to their customized liking. Considering its overall versatility, the Hori PS4 HOTAS Flight Stick is definitely worth trying in 2022.

For those looking to upgrade their basic Microsoft Flight Simulator or Star Wars: Squadrons stick, Thrustmaster’s TCS Sidekick Airbus Edition is hard to beat for its functionality relative to its cost. Authentically modeled after the common Airbus plane, the all-encompassing flight tool can be steadily built over time, making it a wise long-term investment.

With 17 joystick and 16 throttle buttons, 12 programmable controls, additional throttle accessories, ambidextrous options, and the ability to be upgraded with countless Quadrant peripherals, the Airbus has everything gamers need to improve their flight sim experiences. All told, it’s a great tool for long-haul flights to Microsoft Flight Simulator‘s coolest landmarks and locations, and long-term builds alike.

While some enjoy using Mach 2 instead, the FR-Tec Raptor Mach 1 HOTAS Combo has a unique ergonomic throttle that remains extremely smooth despite a no-mounting requirement. Between its cool design, durability, helpful safety lock features, Z-axis for rotation, and 32 thumbable action buttons, the Raptor Mach 1 Combo is one of the most well-rounded HOTAS on the market for the most anticipated PC games of 2022.

With a heavy base to avoid slippage, an easy-to-use tension adjustment dial, and a bunch of triggers to keep enemies down, the Mach 1 is arguably the most ideal HOTAS to use for long periods of gaming thanks to its overall functionality and ergonomic layout. At an affordable price of roughly $100, it’s a great investment for mid-level flight experts.

While some gamers favor the affordability of the Logitech G Extreme Pro 3D (under $40), serious gamers would be wise to invest in the Logitech X56 HOTAS RGB instead (roughly $200). The best mid-range priced HOTAS on the market, the sleek design, sturdy hardware, and preponderance of controls, knobs, and switches (roughly 190) are among the joystick’s several appeals.

The stunning piece of kit of black and silver may be lighter than some would hope for, but its three separate triggers and unlockable throttle to control left and right engines independently are neat functions many will gravitate toward. Most importantly, the HOTAS is extremely easy to navigate, highly programmable, and adjustable, making it ideal for a mid-level flight gamer.

Without exception, the Thrustmaster HOTAS Warthog is the preeminent HOTAS for PC gamers to use in 2022. Beautifully lifelike, the heavy (15 pounds), stable, and extremely durable military-grade metallic apparatus looks like it was pulled straight from the A-10 “Warthog” Thunderbolt that it’s named for and should be reserved for the most advanced gamers and flight simulators on the market.

With limitless input buttons, switches, hats, rudders, rotaries, and sticks one can ever play with, the flawless build qualities of the Warthog are so advanced that it has been licensed by the U.S. Air Force for its unparalleled verisimilitude. Indeed, the Warthog makes its competitors look like mere toys in comparison.

NEXT: 10 Consoles Everyone Loves Now But Hated Upon Release