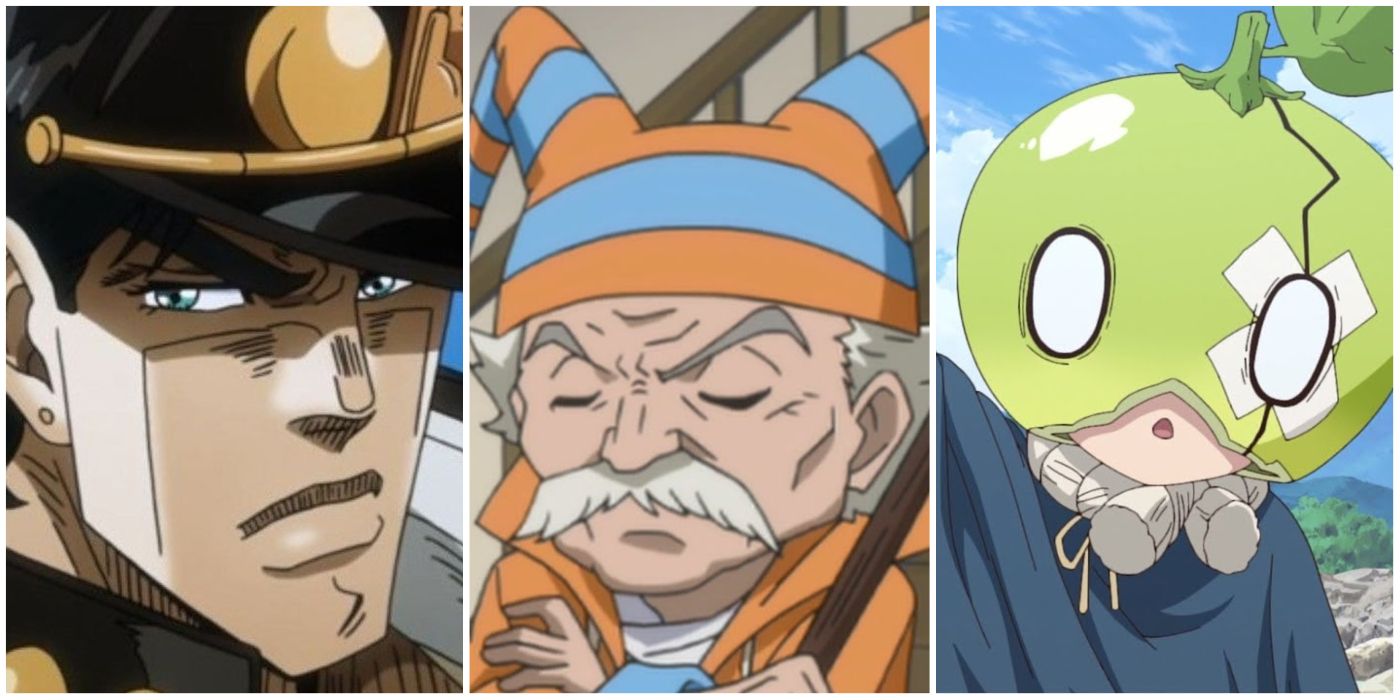 In the expansive realm of Japanese anime, a character’s wardrobe and accessories can say a lot about who they are, how they think, and even what they are capable of. Well-dressed characters and slobs might not get along, and some characters are eager to show off their bling and jewelry. Others decide to wear hats and helmets everywhere they go.

Some characters wear helmets on the job, such as construction workers or pilots, while others wear hats and helmets as a fashion statement or just to stand out in a crowd of colorful characters. Some hats and helmets are pretty cool, but others are so goofy, strange, or gaudy that they make the character stand out for entirely different reasons. And some hats or helmets seem to defy reality itself.

The third protagonist of JoJo’s is the iconic Jotaro Kujo himself, an anime hero known for many things from his motto “good grief” to his Star Platinum Stand to his stern tsundere personality. Then there’s his attire, with his colorful belts alluding to Joseph Joestar’s headband and his even stranger hat.

That hat blends seamlessly into Jotaro’s hair, and it’s such a strange look. It’s like he’s only wearing the front half of a hat, and in later arcs, Jotaro switches to other hats that also blend into his hair somehow. And some of those new hats are weirdly tall or have very long visors on them.

The wild demon slayer Inosuke Hashibira does not wear any part of the standard uniform of the demon slayer corps, not even the pants. Instead, he is barechested and wears his own dark pants and sandals. Most of all, he is known for wearing the hollowed-out head of a gray-furred mountain boar.

This is the head of the mother boar that raised him, and by now, that bizarre helmet serves as Inosuke’s preferred face. His real face is quite kind and gentle, which he doesn’t like, so he would rather keep this helmet on whenever possible. He’s rarely seen without it, even when recovering from mortal injuries.

In Naruto Shippuden and Boruto, the character Konohamaru started wearing more conventional ninja uniforms and accessories, including his own Leaf forehead protector. When he first appeared as a young boy, though, Konohamaru was one of several characters who had a unique, and rather odd, outfit.

Among other things, the young Konohamaru wore a strange gray helmet that had a hole at the top for his brown hair. This peculiar helmet was also decorated with an orange frowny face and a blank red circle. For fashion’s sake, it’s a good thing Konohamaru ditched this outfit, helmet and all.

The elderly master of the Fairy Tail guild, Makarov Dreyar, is much more than a kind old man, though he is that, too. He can use magic to expand his entire body to become a bone-crushing giant, and he can also perform the devastating Fairy Law spell. But that doesn’t stop him from dressing like a cartoony jester.

When he first appeared, Makarov wore a gaudy orange and blue outfit that made him rather difficult to take seriously. He even wore a silly jester-style hat with orange and blue stripes, making him look like a pure comic relief character. He later switched this outfit for much cooler duds and never looked back.

All of the cell characters in the edutainment anime Cells at Work! wear uniforms, from the oxygen-carting red blood cells to the knife-wielding white blood cells who fight off invading pathogens. That includes the “main” White Blood Cell, who is known for his amusing baseball cap.

His white hat actually says “white blood cell” on it, and best of all, his hat will chime and raise a little round sign when germs are nearby. He’s one of the few characters who could caution his friends with the line, “Wait! My hat sensed something.” Few other anime characters could ever say that.

Suika is a charming little character in the edutainment isekai series Dr. Stone, and for the most part, she wears clothes typical of Ishigami villagers such as her blue robes, white rope choker, and stone sandals. But she also wears a watermelon rind like a helmet.

RELATED: 10 Anime Characters Who Dressed Up As A Superhero

Suika does this to correct her eyesight problems, and Senku later added proper lenses so Suika could see even better. Most amusingly of all, Suika can tuck up her entire body into her watermelon helmet and roll around in it, often going at remarkable speeds or moving with total stealth.

Son Goku the legendary hero is nearly always seen in combat attire, such as his classic orange and blue outfit. Meanwhile, his powerful son Gohan decided to pose as the Great Saiyaman, complete with his own costume. It soon became a running gag in the series.

Gohan’s outfit includes a green tunic, white boots, black pants, a black long-sleeved shirt, a red cape, and most of all, that hilarious helmet that hides his eyes behind a dark visor. Bulma generously made this costume for him so he could fight crime incognito, and Gohan soon became known as the Golden Fighter as a result, alluding to his Super Saiyan aura.

The character designs in Hunter x Hunter are quite colorful, from the rogue jester-like Hisoka Morow to the red and blue outfit Kurapika Kurta wears to the funny yellow hat that the minor character Ponzu is seen wearing. Ponzu took part in the hunter exam, and rarely, if ever, did she ever take off that hat.

Ponzu’s hat is evidently more comfortable than it looks, and it never even falls off despite its size. On the practical side, Ponzu is known to store her bees inside that hat, making her headgear a beehive of sorts.

Most of the hats and helmets in Bleach make perfect sense, such as the cool helmet that Sajin once wore over his wolf head and the wide straw hat that Captain Shunsui Kyoraku typically wears. Meanwhile, the spiritual TV star Don Kanonji wears some of Bleach‘s funniest hats of all.

Don’s entire appearance is hopelessly silly, but his hats really seal the deal. His first hat was tall and had a fancy D on it, referring to his name. Then, he wore a shorter but equally goofy hat that looked like cartoony police officer caps, except the hat was red and spelled “DON,” complete with a heart in the O. There was also a blue version.

NEXT: 10 Best Anime Characters Who Play the Piano