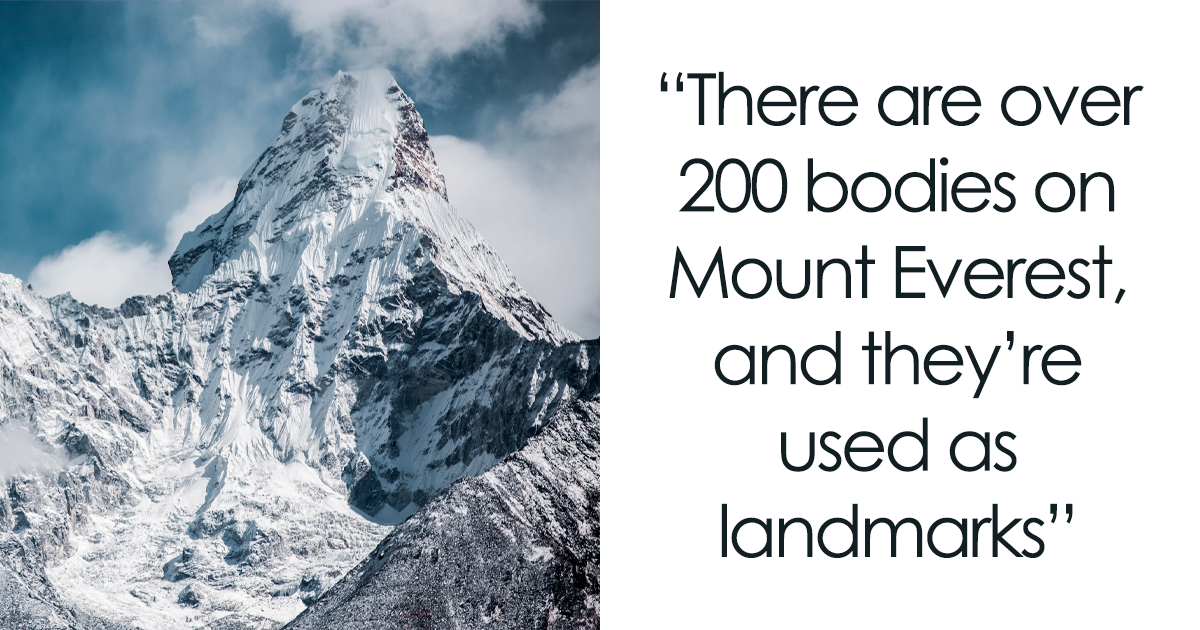 Are you one of those horror junkies who spend their free time watching horror movies and listening to true crime podcasts until late at night? Welcome to the club, our twisted friend!

We’ve all seen some crazy stuff. From creepy-crawly insects to serial killers and haunted houses, there’s nothing we won’t watch if it’s on the screen in front of us. But as frightening as these movies and shows are, some scary facts about our world make reality way more disturbing than fiction could ever be. For example, did you know that Aztec priests offered still-beating hearts to the gods, freshly severed from sacrificial victims? Or that safety coffins were invented because so many people got accidentally buried alive? Or again, that there’s a museum in Pennsylvania that displays mutations, tumors, and anomalies for everyone to see?

Well, you already know the world is full of creepy things, but it’s better to remind ourselves of how much from time to time, right? So here we are with tons of other disturbing facts for you to enjoy! You might be surprised by how many of them sound like urban legends but are actually true.

Teratoma is a tumor made up of several different types of tissue, such as hair, muscle, teeth, or bone, and can occur anywhere in the body, including the brain.

Locked-In Syndrome is a scary condition where you are conscious while in a coma.

There are more vacant homes than homeless people in the USA.

As recently as 1999, it was widely believed by medical professionals that babies could not feel pain until they were a year old.

In 2007, a woman died after drinking more than a gallon of water in three hours. She did it to win a Wii.

According to the FBI, the number of serial killers, that are still not caught among the USA, varies from 25 to 50.

Fatal familial insomnia makes it impossible for someone to sleep for months.

People can die with no discernible cause of death. We’re talking about sudden arrhythmic death syndrome (SADS).

Babies grow hair in the womb that spread to cover their entire body and are called Lanugo.

Around 8% of young people are thought to hear voices at some stage in childhood. This makes hearing voices about as common for young people as having asthma or dyslexia.

The Asian giant hornet’s sting is so painful that one entomologist described the sensation of being stung as feeling “like a hot nail being driven into my leg”.

Mike the Headless Chicken was alive for 18 months after being decapitated.

1 in 50 people in the United States has an unruptured brain aneurysm, which is a bulge or ballooning in a blood vessel in the brain.

The dust specks you see floating around is mostly dead skin cells.

H.H. Holmes, America’s first serial killer, constructed a “Murder Castle,” a hotel with secret compartments and gas chambers to murder unsuspecting visitors of the Chicago World Fair. He confessed to 27 murders, but is suspected of many more.

The “sleepwalking defense” has been used in order to have defendants acquitted for murder.

Scaphism is an ancient form of execution where the victim was trapped between two boats, fed and covered with milk and honey and left to be devoured by insects.

In 1973, two men in a small submarine experienced a malfunction in the sub. The sub slowly started sinking. Although the men were able to radio for help, they knew they only had enough oxygen to survive for three days. When the rescue team finally found them, they only had 12 minutes of oxygen left.

Dance marathons, also known as endurance contests, were events in which people dance or walk to music for an extended period of time. Couples would compete to see who could dance the longest, often for cash prizes. Unfortunately, sometimes people would drop dead from exhaustion on the dance floor.

The average person sweats between 0.5 – 2 liters an hour during physical activity. But according to some studies, people may lose a minimum of 3 liters a day, even without moving around all that much.

“The Devil’s Bible” exists, and it’s a contract between a monk and Satan.

The Catacombs of Paris hold the bones and remains of nearly six million people.

The cosmological theory of the Big Rip posits that as the universe continues to expand at a faster and faster rate, the force will pull galaxies further from each other, then galaxies will be pulled apart, followed by the planets and objects from their stars, the stars themselves, planets, and so forth until even nuclei in atoms are separated.

The birthday effect is a statistical phenomenon where an individual’s likelihood of death appears to increase on or close to their birthday.

Within three days of death, the enzymes from your digestive system begin to digest your body.

A rat’s teeth can gnaw through substances as hard as lead sheeting and cinder block.

In the 1920’s, the American domestic terror group Ku Klux Klan had a youth chapter called the “Ku Klux Kiddies.”

Scientists have found a new kind of tarantula with a horn on its back in southeastern Angola.

Disneyland’s famous Pirates of the Caribbean ride used real skeletons. And some people, including former Disney employees, insist that a few of them are still being used.

The Zoroastrians, an ancient Persian religion followers, leave their dead in special towers to be eaten by birds of prey such as vultures.

Decorations made from human bones adorn the interior of the Sedlec Ossuary.

During mummification, ancient Egyptians removed the brain through one of the nostrils.

A book written 14 years before the 1912 sinking of the Titanic may have predicted the ship’s tragic demise. The novella titled “The Wreck of the Titan: Or, Futility” was about an unsinkable ship hit by an iceberg.

The average person consumes around 38 ounces of mucus every day.

There might be a haunted Russian radio station that has been broadcasting the same tone for 45 years.

You can actually fit all the planets in the Solar System in the space between the Earth and the Moon.

1.2 trillion gallons of sewage, stormwater, and industrial waste are dumped into US waters every year.

Isla de las Muñecas or the “Island of the Dolls” is one of the most haunted places in the world.

When the movie trailer for The Exorcist first came out in theaters, people were too scared, so eventually they stopped playing the trailer in theaters.

People used hollowed human skulls as bowls and cups back in ancient England.