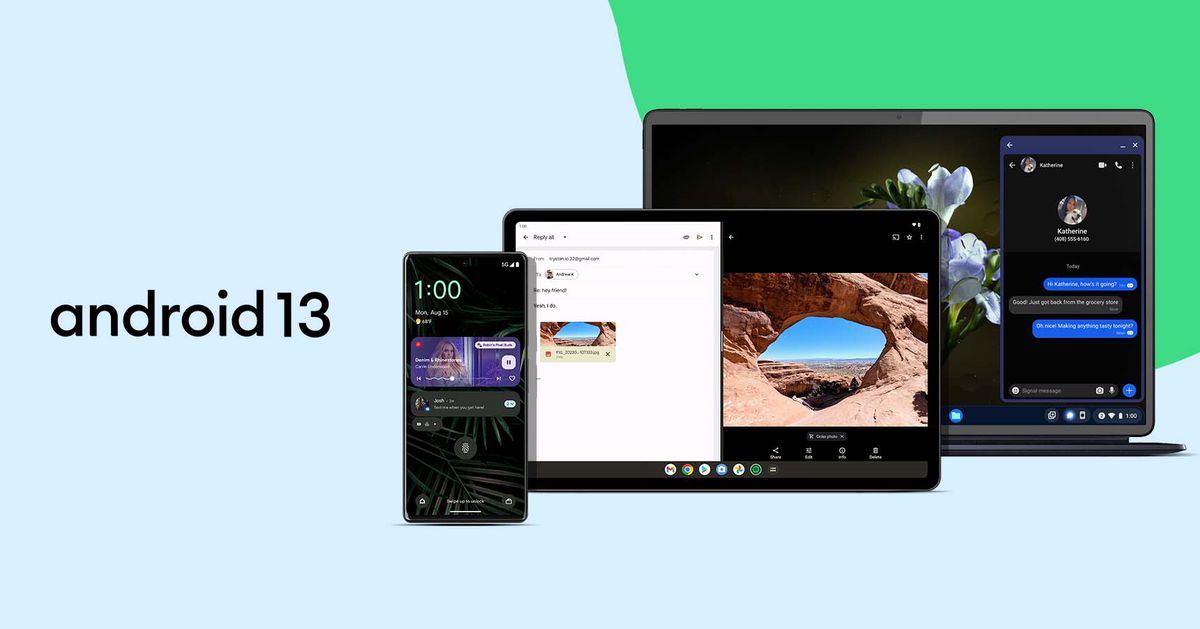 The list of updates arriving with this year’s version of Android is likely to be familiar if you’ve been keeping up with Android 13’s beta releases. There’s the ability to customize non-Google app icons to match your homescreen wallpaper that we saw in Android 13’s first developer preview, a new permission to cut down on notification spam, and a new option to limit which of your photos and videos an app can access.

Back in January, we wrote that Google planned to spend this year catching up with Apple’s ecosystem integrations, and there’s more evidence of this in Android 13’s official release. The update includes support for spatial audio with head tracking, which is designed to make sounds appear as though they’re coming from a fixed point in space when you move your head while wearing compatible headphones, similar to a feature Apple offers for its AirPods. Today’s post doesn’t say exactly which headphones this will work with, but Google previously announced it would be updating its Pixel Buds Pro to offer support for spatial audio.

Secondly, there’s the ability to stream messages from apps including Google Messages directly to a Chromebook, similar to iMessage on the Mac. It’s another feature that Google detailed in January. As well as its own Messages app, one of Google’s promotional assets also shows this working with the messaging app Signal, and the company says the feature will work with “many of your other favorite messaging apps.” The update also includes a feature that lets you copy content from an Android phone to be pasted on an Android tablet and vice versa.

Other Android 13 features include the ability to set languages on a per-app basis, a redesigned media player that adjusts its look based on what you’re listening to, support for Bluetooth Low Energy for better sound quality at lower bitrates and reduced latency, improved multitasking on large-screen devices with drag and drop support for multitasking, and better palm rejection when using styluses.

On this support page, Google broke down which Pixels are getting the Android 13 update today (the Pixel 4, 5, and 6 families of devices), as well as a long list of fixes it includes. A developer page where you can download the images before the update is pushed to your device automatically also notes that upgrading to Android 13 is a one-way trip — a bootloader update included with it means you won’t be able to flash back to Android 12.

The Android update will be coming to devices from other manufacturers including Samsung, Oppo, OnePlus, HMD, Motorola, Realme, Sony, Xiaomi, and Asus “later this year,” Google’s Sameer Samat writes in today’s announcement post. For more details on the changes arriving in the update, check out Google’s post.

Update 2:05PM ET: Added details on device support, and the bootloader increment that prevents rolling back from Android 13 to Android 12.