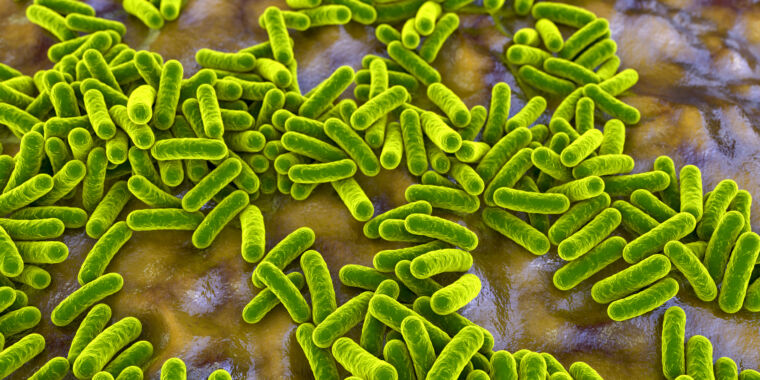 Vertebrates such as ourselves rely on a complicated, multi-layer immune system to limit the impact of pathogens. Specialized B and T cells play a central role by recognizing specific pathogens and providing a memory of past infections.

Obviously, single-celled organisms like bacteria and archaea can’t take the same approach. But that doesn’t mean they’re defenseless. They also have an adaptive defense system that maintains a memory of past infections (and happens to make a great gene editing tool). Now, researchers have found that a family of related proteins is used to fight viruses in organisms ranging from bacteria to humans. While the effects it triggers vary among organisms, it appears to be capable of recognizing a wide range of viruses.

Mammals have a family of immune proteins called STAND (for reasons that are unimportant) that are part of what calls the innate immune system. This arm of our immune system doesn’t recognize specific pathogens; instead, it recognizes general features of infection, such as molecules that are found on the surface of most bacteria.

The STAND proteins all have a similar structure: a portion that recognizes pathogens, a portion that binds to a molecule that provides energy called ATP, and a portion that allows the protein to trigger a response. As is typical of the innate immune system, these can recognize features typical of an infection, such as parts of the bacterial cell wall or double-stranded RNA. Once they recognize something, the STAND proteins aggregate and trigger a response, such as inflammation, to induce the death of the infected cell.

STAND proteins are so central to immunity that they’ve been found throughout the animal kingdom, in plants, and in fungi. The general way they respond to infections appears to have a deep evolutionary history.

How deep? The new research is based on the fact that genes that look like the ones that encode mammalian STAND proteins appeared in many bacterial genomes, including familiar bacteria like E. coli and Salmonella. So, a team of researchers decided to test whether they might be operating in the same way.

The researchers showed that adding additional copies of the STAND genes to bacteria allowed them to resist viral infection more effectively. This worked because the bacteria that were infected died, rather than living long enough to produce new viral particles. This turned out to be a useful tool. The researchers added individual genes from the virus with the STAND genes and looked for the combinations that caused the bacteria to die. Some of the STAND proteins recognized a key component of the virus’s coat, killing the cell; others recognized the motor that packs the DNA inside the virus.

They then checked the equivalent proteins from a diverse range of related viruses and showed that the STAND proteins could recognize most of them. Although all of these proteins form a similar structure in three-dimensional space, the individual amino acids in that structure are quite different. So this suggests the STAND proteins recognize the shape of the structure, allowing them to defend against a huge range of viruses.

Further work showed that, once the viral protein was recognized, the STAND proteins aggregated in groups of four. This activated them as enzymes, at which point they started digesting double-stranded DNA—which nicely explained the lethal effect on the bacteria. But this turned out not to be the only way they blocked viral infections. A search through bacterial genomes showed that some chewed up proteins, while yet others seemed to stay anchored in the cell membrane. Overall, the researchers found 18 distinct ways the STAND proteins might inhibit the activity of the virus.

And the proteins appear to operate in a huge range of species. Looking through bacterial and archaeal genomes, approximately 5 percent of them have some form of STAND protein in them.

Not all good news

Unfortunately, bacteria aren’t the only ones evolving. The researchers also did a check for viral genes that encode proteins that get in the way of the STAND proteins. And, in news that should disappoint everyone and surprise no one, they found them. So, even when viral genes would normally induce STAND to kill cells, these STAND inhibitors allowed the cells to continue growing. How they manage to block these genes isn’t clear at this point.

The other big remaining question is how STAND proteins became part of the immune response in such a huge range of organisms. One possibility is that they’re ancient and have simply been inherited from a common ancestor by all the branches of life. But that doesn’t fit with the data that well. If you make a tree of STAND proteins based on how related they are, it doesn’t line up with the tree of organisms in which they’re found. Put differently, if you look for the STAND protein most closely related to the one in E. coli, you might find it in a bacteria that’s not closely related to E. coli.

That’s a hallmark of horizontal gene transfer, where entire genes are shuffled from one species to another. So, it’s also possible that the STAND proteins evolved in more complex organisms but were picked up by bacteria through horizontal gene transfer and then spread further by the same process. At this point, there’s no data that allows us to figure out which of the possible explanations for the wide spread of STAND proteins is likely to be the cause.