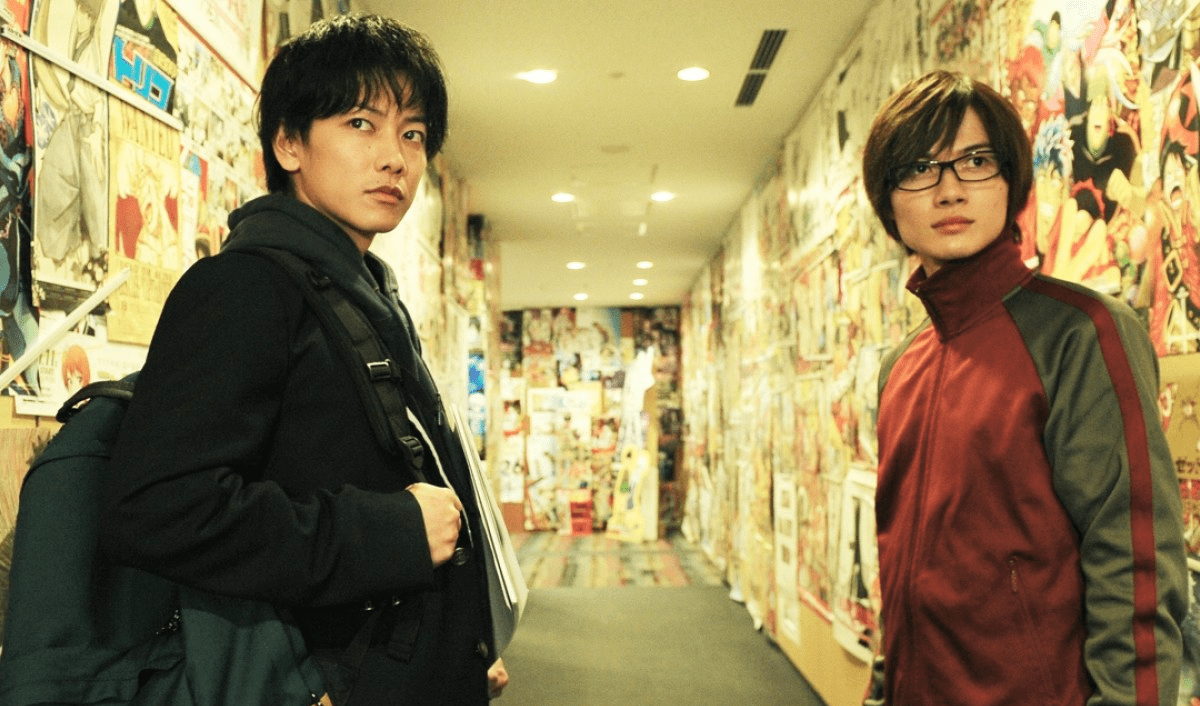 Teenagers locked in their rooms, chained to the desks, drawing frantically, ignoring personal hygiene and feeding on instant noodles, only to be able to appear – even just once – in a comic magazine, is undoubtedly difficult material to forge and transform into an exciting action story, but somehow, Hitoshi One succeeds in such a task. The director is rather familiar with manga adaptations (“Be My Baby”, “Moteki”, “Love Strikes”) and his 2015 film “Bakuman” is a good live action film from a well-known manga, which, despite its two-hour duration, amuses and engages.

Buy This Title
on YesAsia

Japanese comics (manga) are very popular and “consumed” also in the West. In the last decades they wormed their way through all the European countries with their own strong tradition of comics, like Italy, France, Belgium, Spain. However, it is worth mentioning that, in Japan, the mangakas (comic book artists) are real stars, on a par with their characters. Becoming an author of manga is many teenagers’ dream, and almost everybody at school age, sooner or later try to develop a personal style, or a story, or even just to imitate an author, in the hope of discovering a hidden talent. Mangakas work in an extremely competitive environment and at a very fast pace; producing an idea or a successful episode is not enough, as they need to provide consistency and continuity of quality. The stories are published in magazines; the most coveted of all is Shonen Jump, the weekly mag from Shueisha publisher that has been dealing with shonen (manga aimed at a young male audience) since the 60s and which has led to the success of well-known characters and series such as “Naruto”, “Dragon Ball” and “One Piece”.

Moritaka Mashiro (Takeru Sato) is an introverted teenager who has an innate talent for drawing but is timid and not very motivated. Mashiro knows the mangaka environment and his difficulties because his uncle, author of a successful series in Shonen Jump magazine, literally annihilated himself in his work, to the point of neglecting his health and eventually even dying. This dramatic memory restrains Mashiro a bit, who limits himself to drawing portraits of the prettiest girl in school, Miho Azuki (Nana Komatsu) on whom he has a crush. But one day, his classmate Akito Takagi (Ryunosuke Kamiki) – who can’t draw but is outgoing and enterprising – suggests him to team up, and offers to write the stories that Mashiro would then illustrate. Reluctant at first, Mashiro is persuaded when Azuki promises to lend her beautiful voice to the protagonist of their creation, once it will become an anime (the transition from a successful manga to anime is almost “de rigueur”). Armed with motivation and enthusiasm, the boys begin their climb to success, with their goal being to appear in the hugely popular manga magazine Shonen Jump and reach a high number in the reader rankings. Mashiro and Akito’s road to success will cross with those of other mangakas, rivals but also loyal friends, mentors and idols, under the stern gaze of Shonen Jump’s chief editor, Sasaki (Lily Franky) who knew Mashiro’s uncle very well.

High aspirations, adversities overcome through friendship, hard work to achieve success and team spirit. This blend – usually found in successful sport tales – and the inevitable “meta-story” of a manga about two mangakas who create a manga (among other things doubled by the fact that the authors of Bakuman the comic are also two, Takeshi Obata and Tsugumi Ohba) make the film a fun and captivating matryoshka. Furthermore, the fact that it is a “behind the scenes” story rather than a conventional fantasy adventure, facilitates the audience involvement and the identification with the characters. The two guys who play the duo are good and very similar to their inked alter-egos, and their sometimes over-the-top expressions echo that mannerism typical of manga.

Fun CGI effects here and there help the story flow and make some weaker, unavoidable parts less flat, in a story that is always confined within four walls. It is surprising to think that 20 volumes have been filled with the original manga! It must be said that Bakuman is an almost exclusively male story, since the only female character is a brief, sugary and rather stereotyped appearance, but this does not limit the film’s general outcome or its enjoyment.

Making a live action movie from a popular manga is an easy, but at the same time, dangerous move, as often it can have the sole result of alienating the sympathies of the fans of the original source material. However, director Hitoshi One managed to put together an adaptation with an extra gear and a fond tribute to a very peculiar aspect of Japanese popular culture which, in addition to being one of the most important and money-spinning publishing sectors, is also deeply rooted in the heart of a vast fan-base that ignores age and social class boundaries.