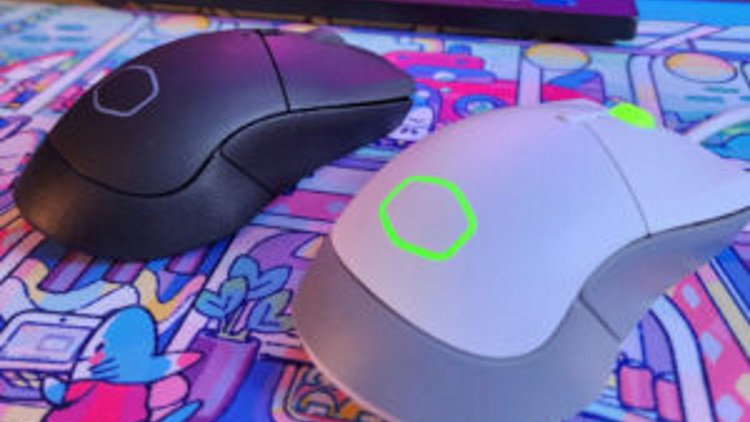 If you’re in the market for a new mouse or just starting to put your gaming setup together but don’t want to blow your whole budget, then you might want to check out Cooler Master. The new MM310 and MM311 Series of mice boast a lightweight, ambidextrous mouse for heavy-duty gaming at an affordable price.  Does it hold up to those expectations though?

Both the MM310 and MM311 feature an ambidextrous design with upgraded mouse feet for low friction and an adjustable DPI for a superior gaming experience. The MM311 is the wireless version of the mouse and includes a USB extension cable for the dongle.

Being ambidextrous is one of the cooler features but even with their ability to work comfortably with either hand, the mice are still geared toward right-handed people. Unfortunately, left-handed people will never be able to use them to their full potential because there are two buttons located on the left side. All the customization and remapping can’t change the placement of those two buttons.

Like many of Cooler Master’s other products, the mice can also be customized using their Cooler Master+ software, however, it is only available for PCs running Windows 10 or 11. While the wired MM310’s DPI can be adjusted up to 12,000, the 311 only goes up to 10,000. The Cooler Master MM series comes in white and black, but the wired 310 model also includes an RGB feature as well.

Both of these mice are solid when it comes to the build quality. They’re like little soldiers that work really well when you’re gaming. My wife is currently locked back into her Fallout phase so I used both mice to play alongside her. As far as their functionality goes, you won’t hear any complaints from me. Once I tinkered with the sensitivity of the mice, which ranges from slow to highly sensitive, everything operated smoothly. Since Fallout 3, the franchise has incorporated a mechanic called V.A.T.S. which allows players to target body parts and shoot them without the need for aiming. I challenged myself to stay from that mechanic and I felt that my experience had remarkably improved. My crosshairs went where I needed them to go and I cleaned up quite a bit of the Mojave desert.

How do they compare to my current mouse?

The mouse that I currently use is the Razer Deathadder V2. What I like about it is that it feels like it fits in my hand almost perfectly. The Cooler Master mice do not give me that same sense of comfort. Both mice, where my bigger hands are concerned anyway, feel just a touch smaller and it’s something I definitely noticed while I was gaming. My pinky and ring fingers would just begin to feel a little sore after a while.

With that being said though, the MM series of mice have a bit more texture to them, whereas the Deathadder I have is smooth. This ultimately made gripping the mouse feels much better. Unfortunately, the scroll wheel doesn’t seem to have that same attention to detail. Even though the wheels are grooved, I didn’t notice them much. They felt much smoother in comparison to my mouse and just gave me the feeling that I was “slipping” off the wheel while using it. I also feel that their lightweight shells DO work against them. The mice feel too lightweight and taking the bottom half of the casing off the 311 felt sketchy the first time I removed it to put the battery in and retrieve the dongle.

I also like the braided cable on my Razer mouse in comparison to the MM310’s. While the Cooler Master does market the lightweight cable as something developed in-house to eliminate snags, it just ends up feeling cheap. As far as snag is concerned, it’s not something I’ve ever had a problem with and my streak remains intact while using the 310. That doesn’t really change the fact that the chord just feels like it’s cheap.

Are they worth it?

The Cooler Master MM series is honestly a nice set of mice if you’re gaming on a budget. As far as gaming goes, they operate wonderfully. Their marketing boasts smooth, snag-free, drag-free gaming in a lightweight shell and they honestly earned it with these guys. My godson is getting his first gaming laptop very soon and I intend to give him one of these mice to use with it.

The MM310 will cost you $29.99 USD, which is nice for a solid, ambidextrous mouse with RGB. Being that it is a wireless mouse, the MM311 will ring in at $39.99. If I had to suggest one over the other, I’d suggest the 310 due to having a higher DPI  and RGB. Regardless, whichever mouse you go with will be great for those shopping on a budget or you’re looking for a mouse to pair with your laptop.

However, where my opinion in this review is concerned, the MM series isn’t going to make you retire your current mouse. If you have a higher budget mouse, it would be considered a downgrade moving to Cooler Master’s latest brand of mice. They both look and feel like a mouse you’d buy on a budget. Thankfully, just to reiterate this part, they function well enough that those last two negatives won’t matter.

Review Disclosure Statement: The Cooler Master MM310 and MM311 was provided to us by Cooler Master for review purposes. For more information on how we review video games and other media/technology, please review our Review Guideline/Scoring Policy for more info.

Affiliate Link Disclosure: One or more of the links above contain affiliate links, which means at no additional cost to you, we may receive a commission should you click through and purchase the item.

While Cooler Master does indeed provide a great mouse for gaming setups on a budget, don’t expect them to replace your current mice either. The mice function great, especially while you’re gaming but they also feel and look remarkably cheap.