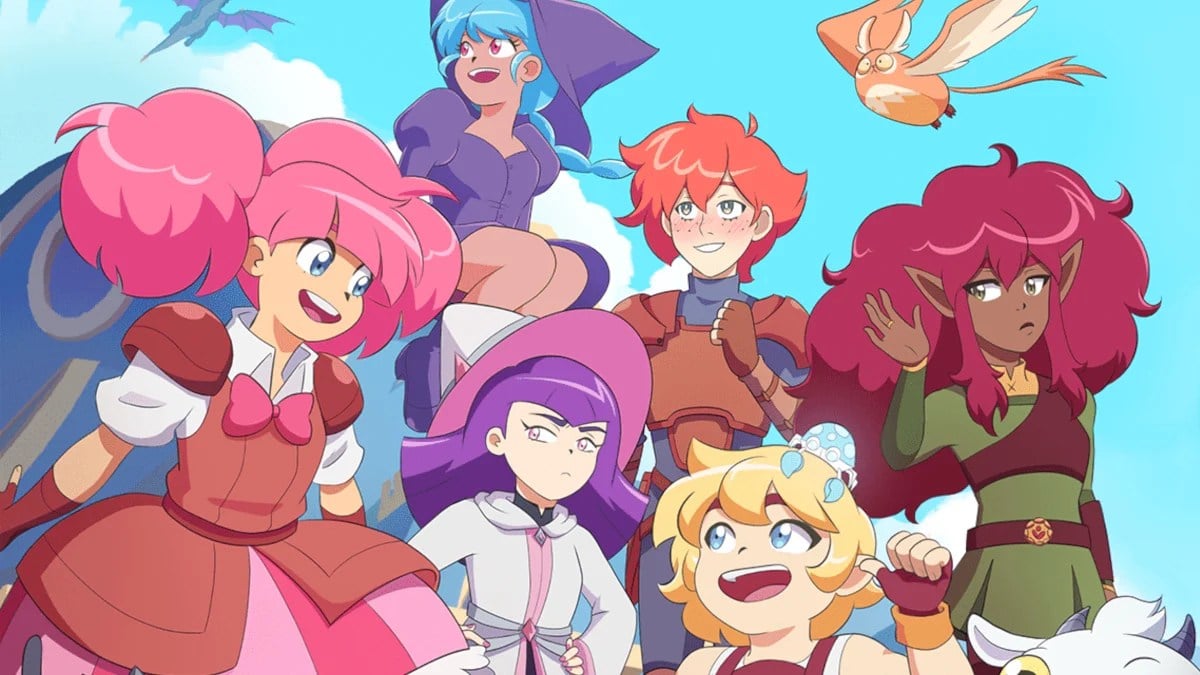 So. There’s a lot to say about Crunchyroll’s High Guardian Spice. The series came out in October of last year, to almost universal backlash. Against my will, the YouTube Algorithm Gods decided to spam my feed with clips of this seemingly innocuous “anime-type” show that really piqued the wrath of nerd bros for its “Tumblrish politicking.”

Out of curiosity, I watched a few of these clips, and I could see some smaller reasons why people might not like it—like the awkward pacing, the sometimes cheap-looking animation, and the low-budget voice acting. Things like that. But what always rubbed me the wrong way was how people seemed to get the most up in arms about “the political BS.”

Now, look, I care deeply about progressive issues, but I wouldn’t call myself a bleeding-heart “SJW.” I’ve been through the ringer of toxic political spaces and have come out of it deciding that no label is the best label for me, just for my own peace of mind (fairly over being patronized by white Marx Bros, thanks). But with that comes a sense of perspective that made me a fairly neutral viewer for a show like this.

So, after nearly a year had passed, I decided I’d finally watch High Guardian Spice. I’d judge it on my own terms. And I did. And you know what? It was perfectly middle of the road, as far as shows like this go. Yes, there are things that could be improved upon, but for the most part, I concluded that the amount of hate it got was directly related to how “political” it was compared to other shows on Crunchyroll. And I just. Well. I mean. I can’t fathom this being the hill people want to die on, making themselves the Bill Mahers of animation.

So let’s talk about that.

I realize that if I don’t address the other elephant in the room—the show’s many actual faults, separate from the “agenda” that’s supposedly being pushed—I’ll have a bunch of Internet Bad Boys try to jump me with factz and burnz. So, yeah, let’s address the actual quality of the show.

It leaves much to be desired. I think anyone who watches it will be able to ascertain that. The infamous “streetlamp PNG” is just one of many little animation blunders that hardcore animation fans have taken issue with; there’s also the fact that Crunchyroll gave this show resources that could have gone to well deserving overseas contributors, or the fact that animation in and of itself is such a difficult industry to succeed in, and a show like High Guardian Spice was somehow able to make the grade.

Some people chalked this up to the fact that, in some major metropolitan areas, animation studios and projects are made up of friend groups. Therefore, to get in on a new show opportunity, you have to know the right people, network just so, and so on. I have no idea what the budget was on this show, so I can’t really comment as to whether its lack of technical expertise was due to only hiring out to friends, or because Crunchy decided to doom it from the start. Maybe it’s a mix of both.

Admittedly, I watched this show from the lens of someone who actually doesn’t mind when a show is technically subpar. I kinda like that, to be honest. I like alt comics and parody dubs, and High Guardian Spice reminded me of both of those things. Unfortunately, that was absolutely not the intent, so it’s fair to criticize. I truly don’t think show creator Raye Ramirez wanted the voiceover quality to remind me of the infamous Dub of the North Star, yet here we are. And here I am, personally not caring as much as more diehard fans of animation, yet understanding their frustrations nonetheless.

The other side of that quality coin, however, is the LGBTQ+ rep, from the perspective of people in the LGBTQ+ community. I’ve heard a lot of varying opinions, especially regarding the treatment of trans issues and characters within the show. Ramirez himself is trans, and he voices a trans character, so as a cis person, I can only assume that he spoke and wrote these plot lines from the heart and his own experiences.

I didn’t, personally, but some people took issue with how blunt the introductions of these issues were. I think the moments when the conversations came up were natural and made sense, albeit with the expected awkwardness of a cartoon. And I also thought it was really refreshing to have characters engaging with their sexuality in a cartoon so openly, from sweet Snapdragon’s journey of self-discovery to Professor Caraway’s engagement with this journey as a person who had transitioned.

But it’s ultimately not my place to definitively comment on whether or not these plot lines were handled with grace, since I am, again, cisgender. I think, if this show has been greenlit for a second season, the team would be wise to listen to its community and go from there. Many thought that Caraway, for instance, was too squeaky-clean, and that he needed more dimension in order to be seen as a believable trans character. Others extended this argument to other queer characters in the show, which I see as an extension of a preexisting issue members of the community take with self-described “diverse” shows.

And while we can, and should, talk more about that good-faith criticism, we first have to deal with the bad faith that dominated the conversation around the series online.

I’m not going to post links to the particular threads where I read these statements, because I’m not trying to flame anyone (or get flamed in the process), but a lot of people took issue with the fact that Crunchy was getting “political” by allowing this show onto its roster—a roster that, by all accounts, is NOT “political,” by way of it literally being made up of another hemisphere’s work and, therefore, sense of “politics.”

A tale as old as time: Introduce something a little different from the norm, and suddenly, it’s a matter of “politics.” Suddenly, the existence of people different from oneself is an act of rebellion against the comfy ignorance of Tomoko-chan’s huge boompaloompas. I hopefully don’t need to explain this one any further. It’s a topic that’s been beaten to death.

Unfortunately, the ignorance itself hasn’t been beaten to death, which is a shame, because it’s this sort of ignorance that got the show review-bombed before it even had a chance to make its case. Dudes saw what Crunchy was giving them, and instead of just doing anything else, they made it their mission to make sure that all this “uwu anti-conservative rhetoric” was a blight, not just on the website, but on humanity itself.

If you look up High Guardian Spice, you’ll see all these videos about “inserting agendas” and “lol gay” this or “huge bitch” that—just an onslaught of carefully-worded videos that remind me of when The Last of Us 2 came out. And yes, between both pieces of media, one is a haphazardly made cartoon while the other is (dare I say it) an incredibly well-made and ambitious feat of storytelling.

But I wrote this article because I’m getting pretty damn sick of the upturned noses and insistent sneers of these bottom-feeding dorks who are so unwilling to extend a bit of empathy, a bit of understanding, that they drown out any possibility of critical thinking regarding anything outside their sphere of existence. They’re making something out of nothing, needlessly so, and consequently sending a message to creators who might have similar creative ambitions that they will be persecuted, that their ideas will be taken out of context to fulfill an “anti-agenda” agenda, that no matter how well or poorly they execute their idea, it just won’t matter, because these guys don’t want “politics” in their anime.

The best way I can think to explain this, and consequently deal with it, is to understand that it comes from a very specific place that Madame Points explains better than I can. (And the implication isn’t that all these people are incels, necessarily; her way of framing this line of thinking is just more articulate and fair than other explanations I’ve seen or read.) All I’ll say is, it must be awfully painful to live a life feeling like a victim and decide that the only way to survive is to victimize others.

To be clear, I wanted to write this article not because I’m a High Guardian Spice superfan or because it’s not deserving of any criticism, but because trends of other-side-ism on the internet disturb me. I firmly believe that, regardless of how poorly made a show might be, it deserves as much of a chance to prove itself as any other cartoon you can watch on streaming platforms. “Politics” shouldn’t get in the way of that.

But to be perfectly honest … I didn’t hate the show. I actually kind of liked it. It didn’t strike me as any more or less creative than other shows of its ilk—honestly, most animated shows, anime or not, tend to bore me to tears and are only interesting to watch for the animation itself. My main complaint with this show is that it should have dealt with its overall identity crisis more adeptly. As it is, it feels like a kids’ show with curse words and not-so-subtle innuendo randomly thrown in.

Considering Crunchy kept this show in the closet for two years, AND its viewer response, I don’t have high hopes for the release of a second season. But if it does come out, I will probably watch it. I’ve gotta know what Neppy Cat is up to, after all.