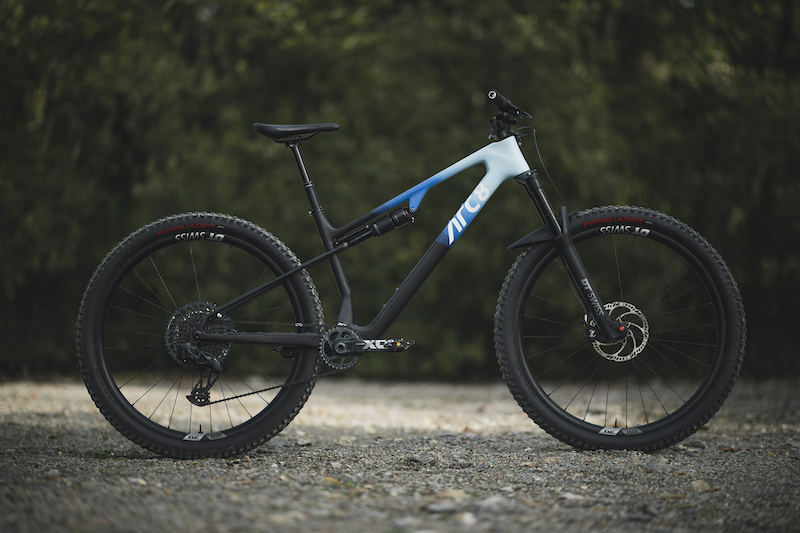 ARC8 have been around for a few years now, but they’re still a relatively small brand. That didn’t stop them from raising some eyebrows back in May with the launch of their Evolve FS, a bike that blended a very low weight with properly aggressive geometry for the bike’s short travel.

It didn’t take a clairvoyant to see that the Evolve FS heralded a new direction for the brand and that their other bikes might just follow suit. The next bike to receive a makeover? The Essential.

The original Essential was the bike that launched ARC8 and was developed way back in 2016 as an aggressive trail bike for the time. But it also saw a lot of time in XC races thanks to its low weight.

The new iteration keeps that same idea but leans on all the learnings from the development of the Evolve FS to drop the frame weight while upping the aggression of the bike.

Seeing as the Evolve FS and new Essential were developed almost in parallel, there’s a lot shared between the two bikes. We dove a bit deeper into all the details behind the new Evolve FS, and so the new Essential, in our First Ride.

The new Essential runs on 29″ wheels front and rear, and instead of being fixed in its travel, ARC8 wanted to give some adjustability to the bike’s intent and shape via the front and rear travel.

With the bike’s light weight and aggressive chassis as a foundation, it allows the Essential to be built up as something with more of a focus on shooting up the hills while still being pretty capable on the downs, or something that swings more in favour of the downhills without compromising the uphill ability too much. All the while having the same light, direct but aggressive flavour in all the guises it can be built in, something that we experienced when riding the Evolve FS.

That lightweight chassis comes about from all the same developments as the Evolve FS. Frame surface area was significantly reduced in both the main frame and rear triangle while also eliminating pivot hardware by way of a flex pivot out back. And the slider suspension design played its role in eliminating weight too.

The compact slider design shaved weight when compared to a link long enough to get the same smooth suspension curves, while bolstering stiffness enough that ARC8 felt they didn’t need a seatstay bridge.

The slider suspension design is a single pivot layout and uses a 230mm long shock that can deliver between 120mm and 130mm of travel by changing from a 60mm stroke to a 65mm. This results in very low leverage ratios, as normally this length stroke would be used to develop 150mm to 170mm travel bikes. Again, this is a concept carried over from the Evolve FS and means that very low pressures are needed to achieve the correct sag.

The Essential was designed with air shocks in mind, but can accommodate those with piggy backs for builds that are more descending focussed. But, if you find more fun in blasting up the climbs it’s also possible to use a remote shock lockout on the Essential.

Other frame details carried over from the Evolve FS include the threaded bottom bracket, room for up to 2.6″ tires and flat mount disc brake mount, that works with 180mm rotors out of the box or 200mm with an adapter.

There’s room for water and gear storage via the two mounts on the downtube, mounts for an upper chain guide and space in the frame for a whopping 38 tooth chainring, on a 55mm chain line.

SRAM’s UDH is out back and all cables are internally routed. They enter via the headset, and that’s all that will be said about that.

The Essential comes in two sizes, M and L, which actually line up closer to other brand’s L and XL sizes in length. As is with the Evolve FS, ARC8 found that they could fit a wide range of rider heights and styles with just two sizes and so dropped the S size. The M size is quoted as good for riders between 160 – 178cm, with the L size for riders between 178 – 190cm.

Reach is 465mm for the M and 495mm for the L, both based around the 561mm axle to crown of a 150mm travel fork. Dropping the fork travel lengthens the reach.

There’s a 64-degree head angle up front, which carries on ARC8’s new philosophy of properly aggressive geometry for short travel bikes. Running a shorter fork will steepen the head angle.

There’s a 76-degree virtual seat tube angle on both sizes that when combined with the seat tube offset gives a 71-degree real seat tube angle. That’s a bit more difference between the virtual and real angles than the Evolve FS, meaning that if your seat is above or below ARC8’s designed seat height, there will be more fore or aft movement from the seat.

Seat post insertions are 245mm and 265mm for the M and L sizes respectively, which isn’t bad at all. But if your preference is to fit really long droppers then it’s wise to double check.

The Essential uses short head tube lengths, like the Evolve FS, at 100mm for the M and 115mm for the L. That means the stack heights are low for a 150mm travel fork, but this is something ARC8 have always done, with a bit of a focus on being able to get the bars low for an aggressive climbing position, if that’s your preference.

Chainstay lengths are also short, by today’s standards, at 430mm on both sizes. But again, this is in keeping with ARC8’s philosophy of having a short back end on all sizes for utmost maneuverability.

The Essential is available in two full builds as well as the frameset, all available in September of this year.