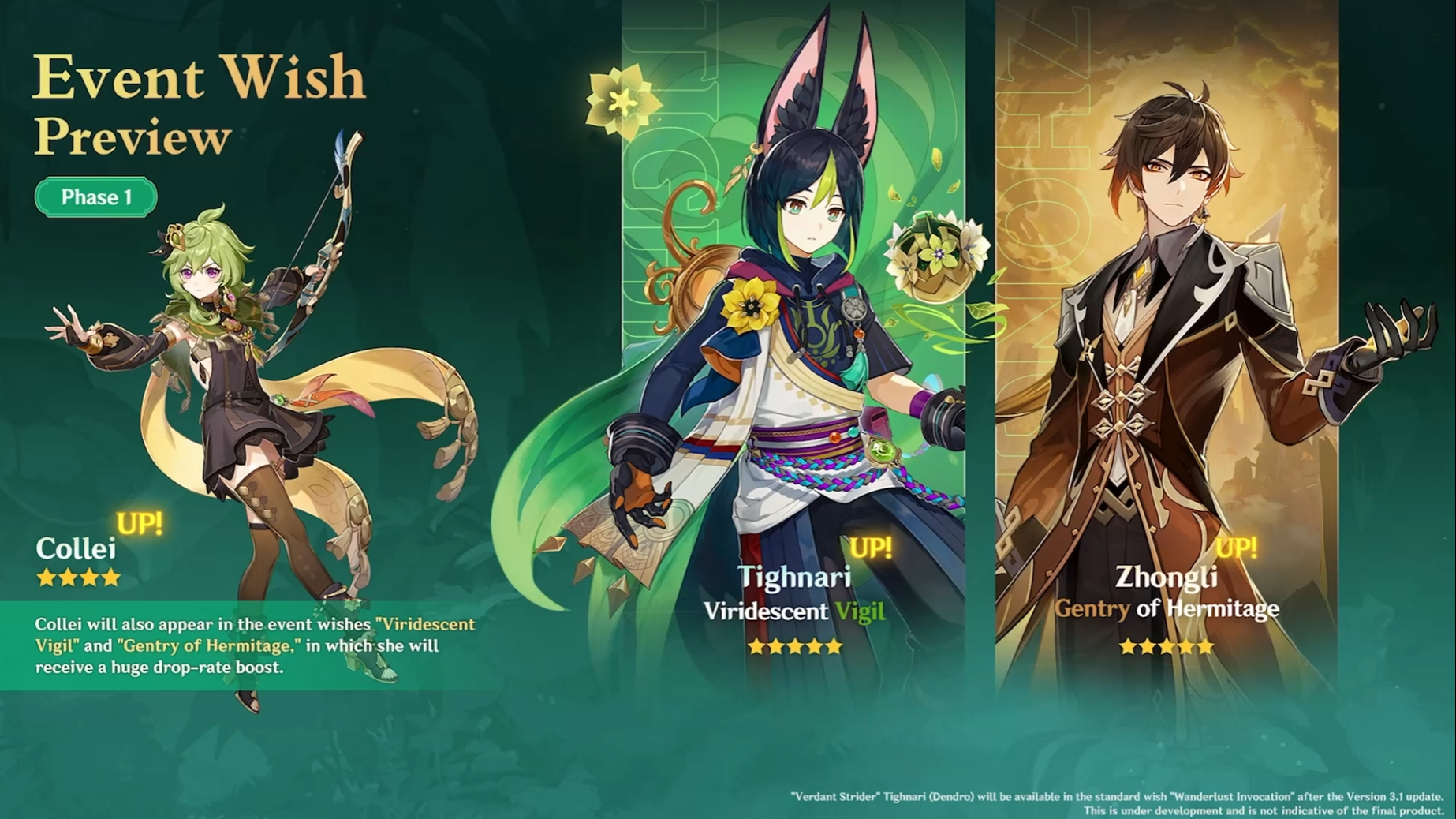 The massive Genshin Impact 3.0 update is just around the corner, bringing with it the new Sumeru region and much, much more. This Genshin Impact guide covers all things Genshin 3.0, including Archon quests, character banners, events, and more.

Want to skip to something specific? Click the links below!

Watch the official trailer to see an overview of Genshin Impact Sumeru 3.0 and the characters coming with it.

Genshin Impact 3.0 releases August 23, or August 24 depending on your timezone. This time, the version lasts five weeks instead of six, with Genshin Impact 3.1 scheduled to launch on September 28.

So far, three new playable characters are confirmed for the 3.0 update, which will be available in the first two 3.0 banners.

There are new NPCs being introduced in Sumeru as well, including Al Haitham, Nilou, Nahida, Dehya, and Cyno.

Genshin Impact 3.0 will run two double-Wish banners, with two five-star characters in each half of the update. The first half features Tighnari, the Dendro archer, and another Zhongli rerun, with Collei, a four-star Dendro archer, appearing on both banners.

The update’s second half features Ganyu and Kokomi reruns, and the new four-star Electro character Dori will also show up on both.

As for weapons, Tighnari’s signature bow Hunter’s Path headlines 3.0’s Epitome Invocation. The update will also introduce a new fish-themed bow and a set of craftable Sumeru weapons, though these will more than likely going feature outside of banners.

Other four-star characters for both banners are still yet to be announced. Keep an eye on our up-to-date Genshin Impact banners page for more information!

The story in Sumeru centers around competing factions in Sumeru City. The Akademiya faction wants to maintain its control of knowledge in the region and beyond and diminish the role of the Archon, Lesser Lord Kusanali. The Archon faction, which seemingly includes Nilou, Tighnari, and Alhaitham, wishes to help Kusanali attain the authority that’s rightfully hers after the previous Archon died 500 years previously.

This is the the tale that unfolds across the first several Sumeru updates, but 3.0 focuses on something a bit different. Sumeru’s lush rainforest is under threat from The Withering, a sinister ailment that’s decimating the environment, and your task is getting to the bottom of what ails the trees in the Archon quest Through the Mists of Smoke and Forests Dark.

Tighnari’s own story quest Vulpes Zerda, also delves further into his role as a forest ranger and the mysteries of the forest.

Dendro is finally making its debut in Genshin Impact 3.0, along with a set of unique new reactions that go beyond the usual two-element formulas.

Check out our in-depth Dendro guide for everything you need to know about planning your party around the new element.

Genshin Impact 3.0 features several events, including combat trials, Dendro tutorials, and the chance to get a brand-new Seelie pet.

This is the update’s flagship event, tasking you with inspiring toymakers in Port Ormos by collecting images and experimenting in combat throughout the region. There’s plenty of rewards to earn, but you also get to invite Collei for free just by taking part.

Take a look at everything on offer in our Graven Innocence guide!

Fayz Trials is Genshin 3.0’s main combat event. Use a special potion to stop time and deal incredible damage with a party of trial characters for a chance to earn Primogems and more. Head over to the Fayz Trials guide page for more details.

Tablet Analytics is another combat event featuring trial characters, but this time, you have less control over the battle situation. Take advantage of random buffs and clear challenges of increasing difficulty for a chance to win Primogems and ascension materials. Our Tablet Analytics guide has everything you need to know about this event.

Lost Riches is back, and much like its previous versions, your goal is finding ancient artifacts and exchanging them for more practical treasures – including a new green Seelie pet! Keep an eye on our Lost Riches guide for more updates once the event goes live.

The first Sumeru patch comes with two new bosses as well: the Jadeplume Terrorshroom and Electro Regisvine. Both drop items essential for Sumeru character ascension, so plan on incorporating them in your battle routine if you end up with Tighnari, Collei, or Dori in your party.

It’s still uncertain whether the 3.0 update will include a new Weekly Boss as well.

Up Next: Genshin Impact 3.0 Events

Was this guide helpful?

In This Wiki Guide

In the open-world action RPG Genshin Impact, you are a traveler drifted from another world who has awoken in a new land. You will explore this wondrous world freely, make friends along the way, and look for “The Seven” — Archons of the seven elements.

Check out the teaser trailer for Hocus Pocus 2.It’s been 29 years since someone lit the Black Flame Candle and resurrected the 17th-century sisters, and they are looking for revenge. Now, it’s up to three high school students to stop the trio of witches from wreaking a new kind of havoc on Salem before dawn on All Hallow’s Eve. Bette Midler, Sarah Jessica Parker, and Kathy Najimy reunite for the highly anticipated Disney Plus Original, Hocus Pocus 2. The sequel also stars Doug Jones, Whitney Peak, Lilia Buckingham, Belisa Escobedo, Hannah Waddingham, Tony Hale, Sam Richardson, Juju Brener, Froy Gutierrez, Taylor Paige Henderson, and Nina Kitchen.Directed by Anne Fletcher and written by Jen D’Angelo, Hocus Pocus 2 will debut on Disney+ on September 30, 2022.

As revealed during Nacon Connect 2021, check out the teaser trailer for RoboCop: Rogue City, an upcoming first-person action-adventure game based on the 1987 RoboCop franchise and the first three films. RoboCop: Rogue City is headed to consoles and PC in 2023.