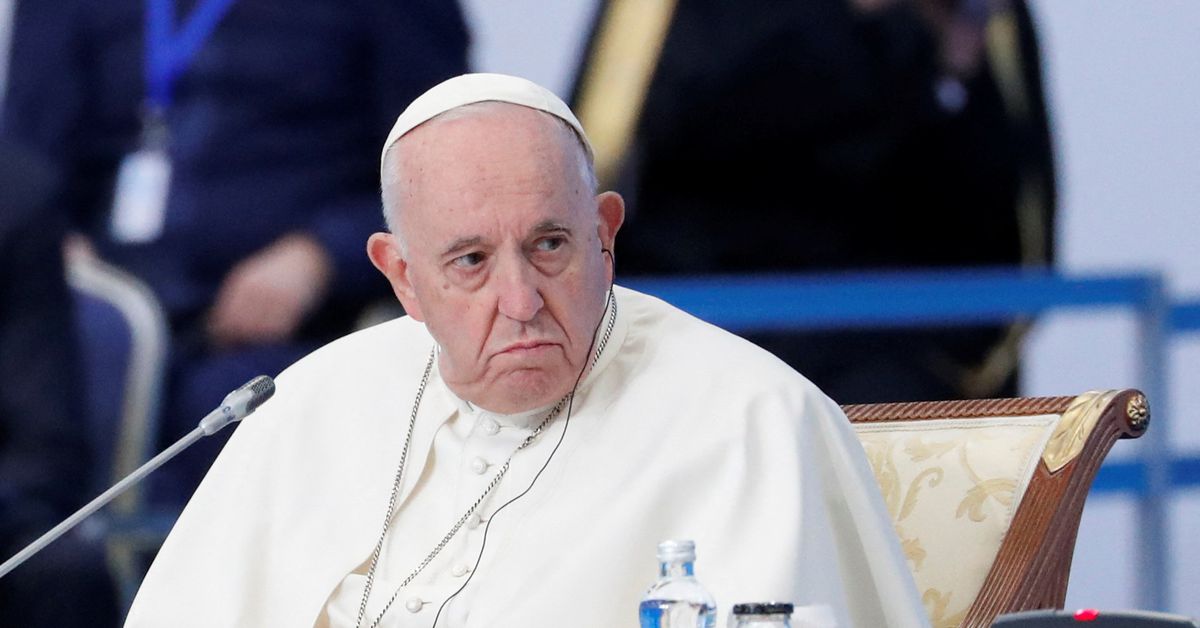 NUR-SULTAN, Sept 14 (Reuters) – Pope Francis said on Wednesday that God does not guide religions towards war, an implicit criticism of Russian Orthodox Patriarch Kirill, who backs the invasion of Ukraine and has boycotted a conference of faith leaders.

On his second day in Kazakhstan, Francis addressed the Seventh Congress of Leaders of World and Traditional Religions, a meeting that brings together Christians, Jews, Muslims, Buddhists, Hindus and other faiths.

Kirill was to have attended, but pulled out. read more

“God is peace. He guides us always in the way of peace, never that of war,” Francis said, speaking at a huge round table in the Independence Palace, a massive modern structure made of steel and glass in the capital of the former Soviet republic.

“Let us commit ourselves, then, even more to insisting on the need for resolving conflicts not by the inconclusive means of power, with arms and threats, but by the only means blessed by heaven and worthy of man: encounter, dialogue and patient negotiations,” he said.

The pope, who earlier this year said Kirill could not be Russian President Vladimir Putin’s “altar boy”, told the conference: “The sacred must never be a prop for power, nor power a prop for the sacred!”

Kirill has given enthusiastic backing to Russia’s invasion of Ukraine, which the patriarch views as a bulwark against a West he calls decadent. read more

Francis later mentioned Ukraine at the end of a Mass for about 6,000 members of Kazakhstan’s tiny Catholic community, asking “how many deaths will it still take” before conflict yields to dialogue.

Pope Francis attends the VII Congress of Leaders of World and Traditional Religions at the Palace of Independence in Nur-Sultan, Kazakhstan, September 14, 2022. REUTERS/Remo Casilli

About 70% of Kazakhs are Muslim and about 26% Orthodox Christians. There are only about 125,000 Catholics among the 19 million population of the vast Central Asian country.

He also expressed concern over the flare up in the South Caucasus between Armenia and Azerbaijan. read more

Kirill’s stance on Ukraine has caused a rift with the Vatican and unleashed an internal rebellion that has led to the severing of ties by some local Orthodox Churches with the Russian Orthodox Church. read more

Metropolitan Anthony told reporters his meeting with the pope was “very cordial” but said Francis’ “altar boy” remark about Kirill was “not helpful for the unity of Christians” and that it surprised the Russian Orthodox Church.

Anthony said the pope told him he wanted to have a second meeting with Kirill. The first was in Cuba in 2016.

Francis also said that, while violence in God’s name was never justified, the “viruses” of hate and terrorism would not be eradicated without first wiping out injustice and poverty.

He said religious freedom was essential for peaceful coexistence in any society and no creed had a right to coerce others to convert.

Francis, who wrote a major document in 2015 on the need to protect the environment, said religious leaders had to be in the front line in bringing attention to the dangers of climate change and extreme weather, particularly its effects on society’s poor and vulnerable.