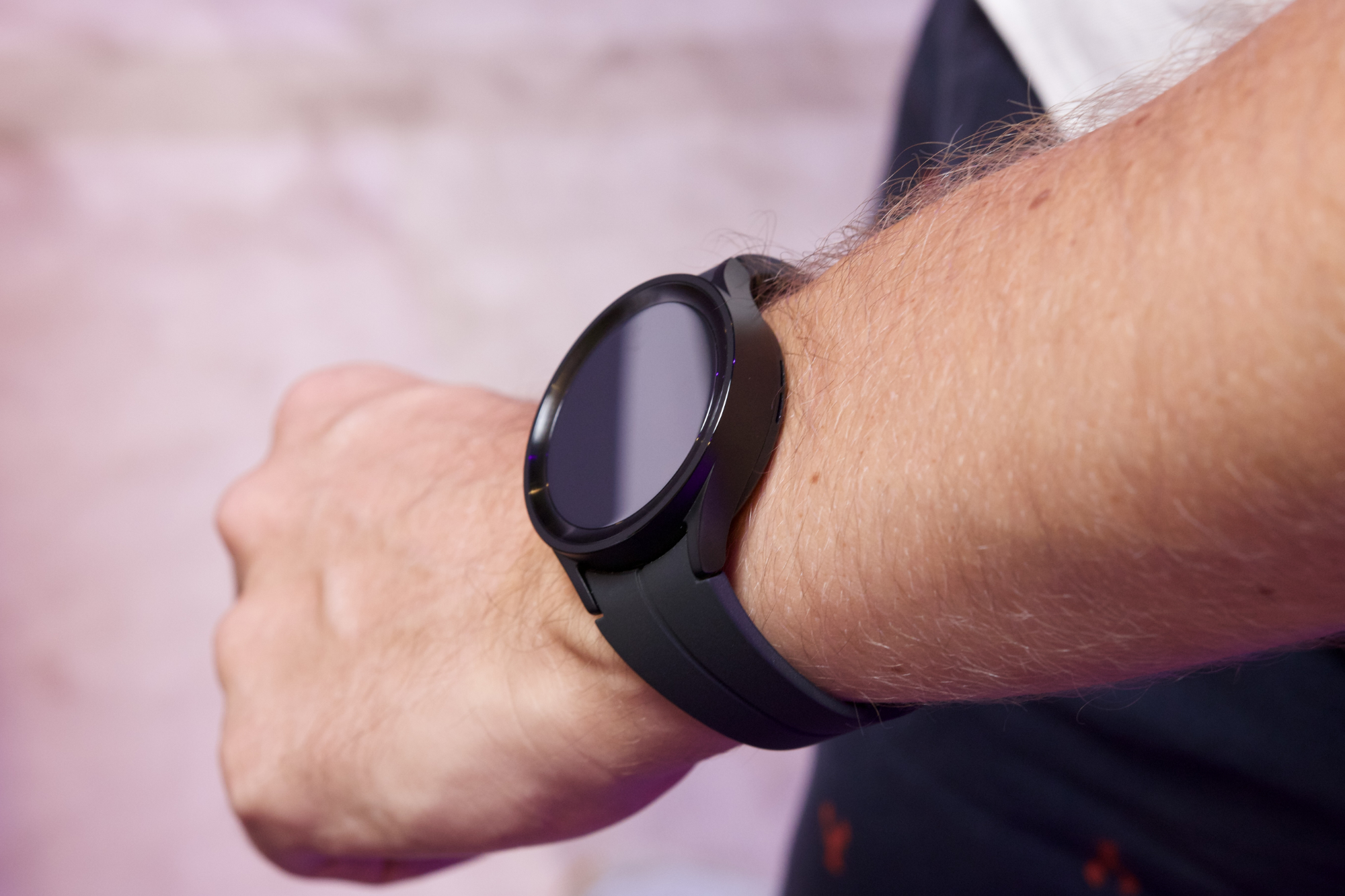 I walked away from my early hands-on time with the new Samsung Galaxy Watch 5 Pro feeling positive toward it. I liked the design, the way it looked on my wrist, and the materials used in its construction. I wanted to wear it again, and that was a very good sign.

However, while it stayed in my mind, I gradually became more confused about the whole adventuring, outdoorsy angle Samsung was pushing, and the more I thought about it, the less sense it made.

This is a luxury smartwatch

When I first put the Galaxy Watch 5 Pro on, I didn’t think rugged — I thought luxury. The case is made from titanium, and the screen is covered in thick sapphire crystal. Titanium is a great material for watches, but not really because it’s durable. It’s very skin-friendly, it’s very light, and it has a wonderful soft warmth that removes the harshness of steel or the cheapness of plastic.

It’s definitely durable, but it’s debatable how much more durable it is over stainless steel, resin, or a polymer blend. Garmin uses titanium for the bezel on its Fenix 7, but a reinforced polymer for the case, just like Suunto does for most Suunto 9 Peak models. Only on the unashamedly luxurious Marq Adventurer does Garmin upgrade to a full titanium case.

The Galaxy Watch 5 Pro’s case is only marginally larger than the 44mm Galaxy Watch 5, and less than a millimeter thicker. But it does extend above the screen, and there’s an obvious bezel around it too. I suppose this may offer some protection against knocks, but remember the screen is already covered in thicker sapphire, and the case is titanium. If the extra protection is negligible, isn’t it just a design decision?

You can get a rugged-looking strap with a big, strong buckle, but the Pro works best with the new magnetic D-Buckle straps — which are purely premium. The fold-over clasp can be adjusted without tools, in seconds, and it’s very convenient. It’s secured with a magnet, which works well and looks really slick. However, it adds bulk to the underside of the strap, which doesn’t always work well if you don’t want it to snag on anything.

Sorry Samsung, but when I look at my own watch collection and spot the one made of titanium with a sapphire crystal — which happens to have a 45mm case and a fancy clasp — it’s absolutely not an adventurer’s watch; it’s a luxury watch.

Outdoors is an afterthought

So, how do you sell a large, posh version of the basic Galaxy Watch 5 to the outdoorsy type? You call up manufacturing and tell them to make a plastic case that clips over the top of it. Pair it with one of the tougher rubber straps, and the Galaxy Watch 5 Pro has become a sort-of rival to Casio’s GSW-H1000 G-Shock smartwatch. Except the very idea of covering up the titanium case you’ve paid a lot of money for with a cheap bit of plastic is very odd indeed.

If the plastic case looks like an afterthought, the fact it’s not bundled with the watch makes it sound like one too. If you’re going to make a watch that takes on other popular(ish) adventurer’s watches, why not include it? Or build bezel and button protection into the watch itself, rather than resort to a piece of plastic covering up a desirable titanium case in the first place? There aren’t any oversized buttons to make pressing them easier when wearing gloves either, a common feature on any watch used for specific, demanding activities.

Samsung is highlighting its GPX enhanced navigation feature as a big selling point. It’s for hikers, cyclists, and long-distance runners to share their routes with friends, plus it will help you route back home easily, and comes complete with guided turn-by-turn navigation. It’s a really good feature, but both the Galaxy Watch 5 and Watch 5 Pro have the same processor and GPS system. In other words, it’s a software feature, and there’s no obvious reason why it couldn’t work on the standard smartwatch. Has it just been held back to fit the narrative?

The larger case contains a 590mAh battery to help it last long enough to track more time-intensive activities that require GPS, but there’s no mention of specific extended battery modes to help on even longer adventuring trips. That’s standard on Garmin, Suunto, and even Huawei’s smartwatches.

While the Watch 5 Pro is a credible sports smartwatch, it’s missing most of the features that see hardcore adventurers wear competing models from brands with masses of experience in this area. GPX aside, the regular Galaxy Watch 5 will probably be more than enough on a technical level for the casual hiker, cyclist, or weekend adventurer.

Is Samsung looking ahead?

If I had been told the Galaxy Watch 5 Pro was a premium version of the Watch 5 with a larger battery and higher-end materials and straps, I absolutely would have accepted it. If I’d been shown the plastic case and told it’d protect the premium case if by some chance the wearer wanted to go mountain climbing with it, I’d have nodded in agreement.

To me, the Galaxy Watch 5 Pro is a statement-making smartwatch made from higher-class materials than the Galaxy Watch 5. I’m baffled why it isn’t being pitched like that, and as I scrolled through Samsung’s promotional website, I found a section concentrating on the design and how it’s ideal for a “run or the runway.” Samsung appears to be as confused about what the Watch 5 Pro is as I am.

Then I remembered the Galaxy Watch’s archrival, the Apple Watch. Rumors galore have linked Apple to the release of an Apple Watch Pro, which will shift away from the luxury “Edition” versions and toward those who want a tougher watch on their wrists. The Apple Watch Pro is rumored to have a titanium case, more shatter-resistant glass, and enhanced hiking and swim-tracking features. It may also get longer battery life.

I’m no conspiracy theorist, so I know it’s absolutely a coincidence that the luxurious Galaxy Watch 5 Pro seems to be primed and ready — at least at a marketing level — to compete with such a smartwatch, should the need arise later this year. The switch from established Samsung smartwatch nomenclature — no more Watch Classic — to the Apple-ified Pro name isn’t fishy behavior either. Not at all.

I still want one, just not for adventuring

The clunky way the Galaxy Watch 5 Pro is being promoted —it’s the smartwatch designed for adventurers, according to Samsung — risks relegating it to an even smaller niche than it would if it was called a luxury alternative to the Watch 5, and could put more people off than it attracts as the specs don’t really back up what we’re being told the smartwatch is for.

Does this mean I’ve stopped thinking about the Galaxy Watch 5 Pro? No, not at all. When you ignore Samsung’s messaging and think about it as a stylistically unique addition to Samsung’s smartwatch range, made with luxury materials borrowed from traditional watchmaking, and with a battery that will last a little longer than the regular Galaxy Watch 5, it makes far more sense and becomes tempting.

I liked the Galaxy Watch 5 Pro a lot when I wore it, and am eagerly waiting to wear it again. If you’re on the cusp of ordering one, whatever you do, just don’t buy that awful little plastic case. Wear it as a luxury smartwatch, as I think was originally intended.