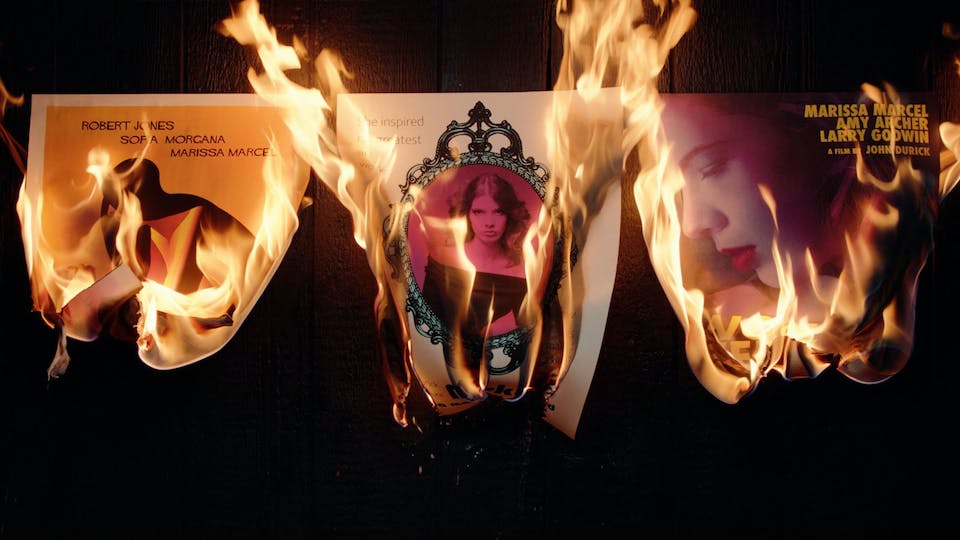 It’s hard to imagine a video game more worthy of an Empire review than Immortality. The latest effort from Sam Barlow, director and writer of Her Story and Telling Lies, this is both a love letter to cinema as an art form and a warning of the perils of the film industry that too often controls that art.

Like Barlow’s earlier works, Immortality is more of an interactive movie than a game, with live-action scenes performed by real actors, and player interaction largely limited to point-and-click adventure style investigations. Presented as a cluster of lost footage covering the career of long-missing actress Marissa Marcel (in reality, French-American actress Manon Gage), players are initially charged with reconstructing the three films Marcel starred in between the 1970s and 1990s. However, as you navigate between actual takes of the movies themselves and a mountain of behind-the-scenes and rehearsal footage shot around the fictional movies, Immortality builds up its own story, that of what happened to Marcel and her creative collaborators, and how Hollywood can abuse and corrupt even as it builds legends.

Even the gameplay mechanics, limited though they are, pay homage to classic film production. The player is the editor, scrubbing backwards and forwards through each clip in the same manner as on a vintage Moviola, looking for Match Cuts between scenes or sometimes even individual frames. Pause – what Immortality calls Image Mode – and you’ll be able to move a cursor through the shot, selecting actors or props and jumping to another clip where they appear. Sometimes there will be an obvious object to select – a lingering shot on an actor’s face or a prominent prop – but often, Match Cutting an innocuous background item or stage extra will unlock an important new scene.

As you’re hopping between shots, Immortality itself starts to reveal its own identity: that of a deeply disturbing horror, both psychologically and supernaturally.

Initially, you’ll be drawn to recreate the films Marcel starred in, piecing narratives together scene by scene. Each clip is brilliantly constructed in their own right, and great examples of the genres Barlow is basing them on, reflecting the styles, themes, and production techniques of the times they were shot in. Ambrosio is presented as a 1970 supernatural thriller set in Middle Age Rome, which sees Marcel corrupting the eponymous monk with pleasures of the flesh. Minsky follows, a New York-set cop drama where Marcel reappears as the muse to a murdered artist, suspected of his killing. Finally, Two of Everything is framed as a glossy ‘90s glamour movie – think Showgirls, with a lower budget. Here in particular, the behind the scenes clips are pivotal, with the nearly three-decade gap in Marcel’s career a key mystery.

All three brilliantly channel the creative and social mores of the time, especially Minsky, which is a snapshot of New York’s bohemian art scene of the late ‘60s and early ‘70s. Characters hang around in artist communes and disused warehouses, discuss their transgressive ideas for changing society, engage in sexual freedom and experimentation – it could very well be actual archival footage, such is its authenticity. There’s even a cameo from Andy Warhol – or a convincing 21st century lookalike, at least.

Yet as you’re hopping between shots, Immortality itself starts to reveal its own identity: that of a deeply disturbing horror, both psychologically and supernaturally. As you progress, the footage itself seems to take on a life of its own – there are shades of Hideo Nakata’s Ringu – with flickers of something otherworldly flashing into view as you scrub back and forth. It’s here where the most subtle game mechanic comes into play – controller rumble. The sometimes barely noticeable thrum in your hands (PC players: skip the mouse and keyboard for this one) is one of few cues that something is wrong. Scanning backwards at those points will bring ghost images into view – just a glimpse to start with, but with finesse, you may be able to lock into something else. New clips will play, ones that don’t linger in the archive you’ll be building, often depicting something unnatural that seems to connect all three films.

To say more would be to venture into spoiler territory, but it would be a disservice not to highlight Manon Gage’s performance throughout Immortality. Often pulling a cinematic Inception by playing roles within roles within roles, her every scene – whether as Marcel, or any of the characters Marcel is playing – is never less than magnetic. From eager ingenue to seductive nun to darker turns in front and behind Barlow’s camera, Gage nails every single frame and marks herself as a phenomenal talent to watch out for.

Immortality’s relatively low levels of interactivity may ultimately work against it for anyone looking for a more conventional gaming experience. However, with its innovative use of multi-layer non-linear storytelling, it’s unlike almost anything else. For players with the patience to navigate reams of footage, and especially for fans of cinema as an art form and its history, this is an outright masterpiece.