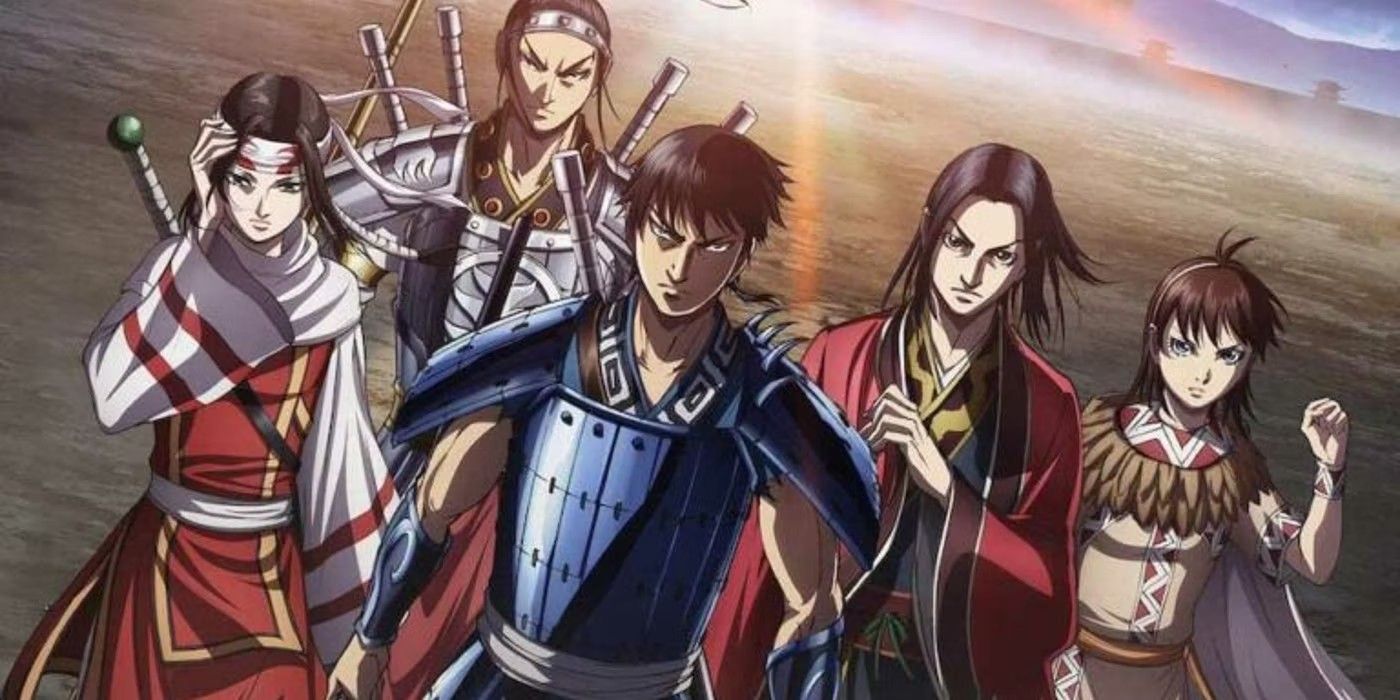 True manga fans who have still not read Kingdom should check out what can easily be considered the one true rival of One Piece. Just like Eiichiro Oda’s masterpiece, Kingdom has been running for a very long time; its serialization started back in 2006 in the pages of Weekly Young Jump, a magazine published by Shueisha dedicated to seinen manga (aimed at young adult readers).

Over the course of the years, Kingdom gained both commercial and critical success. It’s the 20th best-selling manga in history, with over 90 million volumes sold. In 2013, Kingdom‘s author, Yasuhisa Hara, also won the prestigious Grand Prize at the Osamu Tezuka Cultural Prize awards, an award reserved for only the very best manga creators.

Related: One Piece Teases the Return of the Lost Straw Hat

Kingdom is a historical drama set during the Warring States period in ancient Chinese history. It follows the battles of young upstart soldier Li Shin (Li Xin in Chinese), who follows the dream of King Ei Sei (Ying Zheng) of Qi, who wants to unify all of China to put an end to the constant warfare. From the huge pitched battles to the duels of generals and commanders, all the way to court intrigue and political machinations, Kingdom has everything that a fan of shōnen manga (like One Piece or Naruto) could ask for.

Kingdom draws inspiration from one of the most exciting periods of ancient China, halfway between legend and history. King Ei Sei is, in fact, the first Chinese Emperor, a legendary figure who conquered and unified six States to create the foundation of modern China (he also ordered the construction of the Great Wall, and was buried with the famous Terracotta Army). The actual protagonist, however, is Li Shin (who is also based on a historical figure), a peasant boy who rises through the ranks of the military to become one of King Ei Sei’s most trusted generals. Shin wants to help the King realize his dream and, in the process, become one of the legendary Great Generals.

The manga mostly follows the military campaigns of Shin and his group, the Hi Shin Unit, which grows from a small battalion to an entire army. While parts of the story are similar to the shōnen manga that can be found in Weekly Shōnen Jump, Kingdom has a more mature tone. Through the Hi Shin Unit’s battles, the manga carries its readers through the bloody history of the unification of China, an era where millions of men lived and died on the battlefields. Many memorable characters take the stage, mostly the great generals who led these vast armies, but there is also room for the plights of the common soldiers, especially those of the Hi Shin Unit, which acts like a big family. While One Piece is not set in a real historical period, a lot of characters and themes in the series take inspiration from real-world legends and myths, and history has actually a lot of importance for the story of the manga.

Kingdom’s Legacy in the Manga World

Kingdom is one of the longest-running manga in history, having reached, as of June 2022, 66 volumes and over 700 chapters. This is not an easy feat in the world of manga, where even huge best-sellers such as Naruto and Bleach ended around volume 70. Kingdom, on the other hand, is still far from being over—if the story will proceed until its natural conclusion with the unification of China. In 2015, mangaka Yasuhisa Hara declared that he plans to conclude the series with volume 100 but these kinds of declarations should be taken with a grain of salt, as proven by One Piece‘s author Eiichiro Oda, who made similar statements many times in the past.

The reason is that, as long as a manga is successful and the author’s creativity or energy does not burn out, it will keep being published. In terms of success, Kingdom has nothing to envy of other manga that are more famous in the West. It periodically ranks among the best-selling manga each year, reaching 3rd place in 2019 and 2nd in 2020, with 7.6 and 8.2 million copies sold, respectively. Kingdom also entered the Guinness World Record for the “Manga Written by the Most People,” by having 1,000 fans and celebrities redraw the 26th volume for the “Social Kingdom” campaign. A total of 1,087 people participated, including famous mangakas such as Eiichiro Oda, Naruto‘s Masashi Kishimoto, JoJo‘s Hirohiko Araki, and Vagabond‘s Takehiko Inoue, proving that Hara’s work is appreciated by his peers. Of course, One Piece also broke many records, being the best-selling manga of all time, and has been running for 25 years (a record that Kingdom will likely break in the future).

Kingdom‘s most unique feature is that the majority of the manga takes place on a battlefield, during the latest clash between the armies of Qin and their rivals. The action and myriad of characters in each panel make readers feel like they’ve entered a Dynasty Warriors videogame. But, more often than not, Kingdom focuses on the tactical aspect of warfare. Strategists have a big role in the series, and the most dangerous and effective generals are those that can predict their opponent’s moves or turn the tide of a battle with one unexpected decision. Every commander has his own style: some like to lead the charge and smash through the enemies’ defenses with brute force, others are more cunning and use advanced tactics to prevail.

There are very few manga around that have a similar setting or feeling. The Heroic Legend of Arslan, from Fullmetal Alchemist‘s Hiromu Arakawa, also follows a young king who has to reclaim his throne on the battlefield. Ad Astra: Scipio to Hannibal is a beautiful historical drama set in ancient Rome, that follows the lives and battles of the great rival generals, Scipio and Hannibal. Finally, the late Kentaro Miura’s Berserk also focused a lot on battles and warfare in its early stages but later fully embraced its dark fantasy vocation. This is one point where Kingdom differs from One Piece, as Eiichiro Oda’s series prefers to focus on one-on-one duels between powerful fighters, but there are a lot of those matches in Kingdom too.

Related: One Piece: 10 Most Dramatic Battles Across The Entire Manga

Overall, Kingdom is a great manga that mixes historical drama and high-intensity action. While the series still follows many of the shōnen and seinen genre tropes, the characters are all well-developed and interesting, and the historical setting gives a lot of traction to the story. Sadly, Kingdom has not been officially licensed in English yet, which somewhat limits its visibility outside of Japan. Due to its longevity and commercial success, it’s ability to seamlessly blend history with fiction, and harrowing fight scenes, Kingdom can be considered the one true rival of the juggernaut One Piece, which is also set to end in a few years, while Kingdom will keep going long after that.

Next: Shonen Jump Readers Are Missing Out by Ignoring Competitor Kodansha