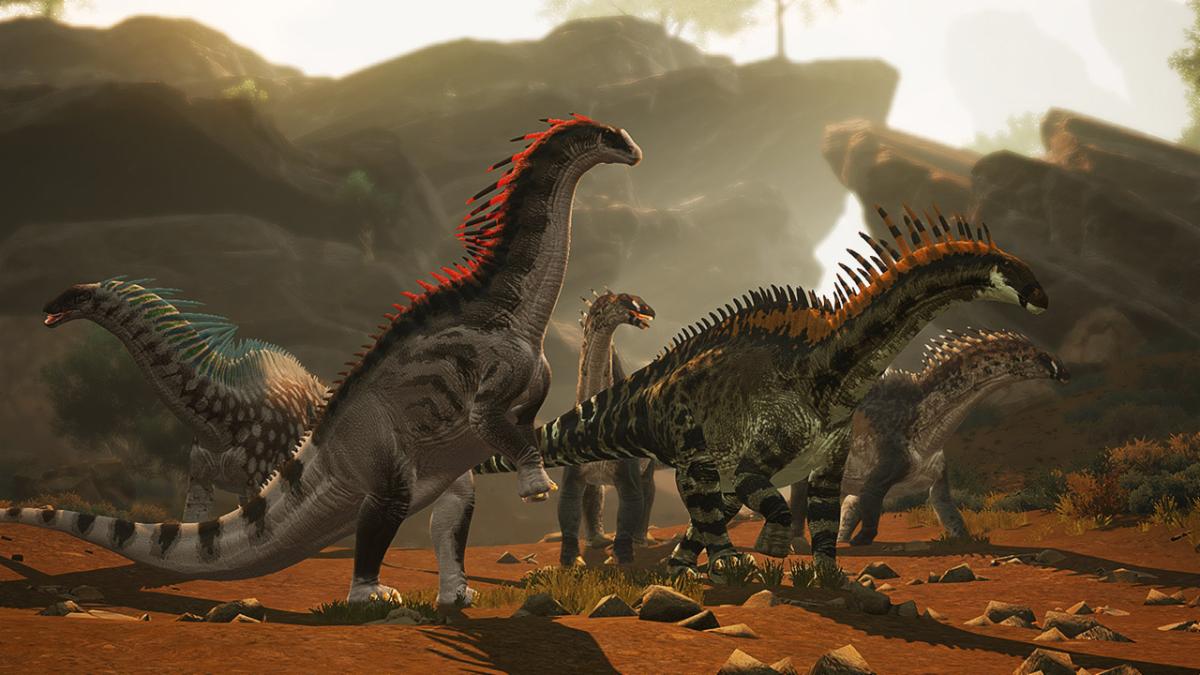 The closed beta Founder’s Edition for Path of Titans is going live on Switch today, Alderon Games has announced.

Players will be able to survive, explore, and thrive through lifecycle events and social gaming. With the Founder’s Edition, they can find and build a home cave within Panjura, the first of several 8km x 8km maps. It’s possible to rank up on official servers, on custom community servers, and move between linked servers with their favorite dinosaurs on solo and social pack adventures to explore the open sandbox world. The MMO also has side-questing for the menagerie of air, land, and sea dinosaurs, with rewards, incentives, combat skills, and cosmetics unlocked along the life journey. Cross-play is supported between Switch, PC, PlayStation, Xbox, Mac, Linux, and mobile.

Here’s some additional information about the game:

With the launch of the T. rex, the game’s official roster of dinosaurs stands at 26. Another dozen creatures, a mix of denizens from land, air, and sea, are planned for all platforms. Path of Titans is a massively multiplayer survival game that invites players to become a dinosaur, evolving from egg to adult in a rich ecosystem filled with dino species, AI creatures, and up to 200 other human players. Explore an environment filled with natural events, all while avoiding death and augmenting your dinosaur to suit your play style.

Massively Multiplayer: The huge, dynamic environment is filled with AI critters, quest zones, and caves set for you to create a home base, on servers for up to 200 players. Team up with players to take on challenges together or join friends in a herd for even larger, coordinated group efforts to take on the big in-game events! Or go it alone and carve your own path, how you survive is completely up to you.

Character Customization: Unlock skins and alternate species of each dinosaur genus. Change the individual colors of your dinosaur character and apply alternate subtle markings. Choose between multiple species of your favorite dinosaur, each with unique visual characteristics. Create a creature unique to you!

Questing & Events: Complete quests that encourage and reward immersive cooperation and unlock achievements to collect exclusive in-game content. Collect materials to build nests to sleep in, hunt various rare critters and PvP dinosaurs, forage for hidden plants, or defend your herd members, all while enduring natural world events that will shape the landscape around you.

Attributes & Abilities: Spend points to alter your abilities and attacks to tailor your character to your preferred play style. Swap out one of your bite attacks for a claw attack or a tail swipe, or reduce your HP and damage in exchange for more stamina and faster movement.

Swimming, Diving & Fishing: Submerge fully underwater and hunt for AI fish and avoid being chomped by prehistoric crocodiles. Lurk just under the surface and lunge out of the water to surprise unsuspecting prey. Traverse the complex redwood river system and explore the depths of the swampy lakes. Make the most of your environment to survive as a semi-aquatic hunter! Coming soon is Gondwa, a map of islands with extensive inland waterways, lagoons and shoreline inlets. Home to your creatures of the air, land and water!

Modding: Community is important to any game, and the Path of Titans team recognizes the amount of passion and talent dinosaur enthusiasts have. Our game has powerful modding tools that will be free for anyone to download and use. With extensive documentation to guide modders, anyone will be able to upload their content for cross-platform cross-play gamers to enjoy.

Path of Titans was announced for Switch at the end of July. It was given a vague summer release window at the time.