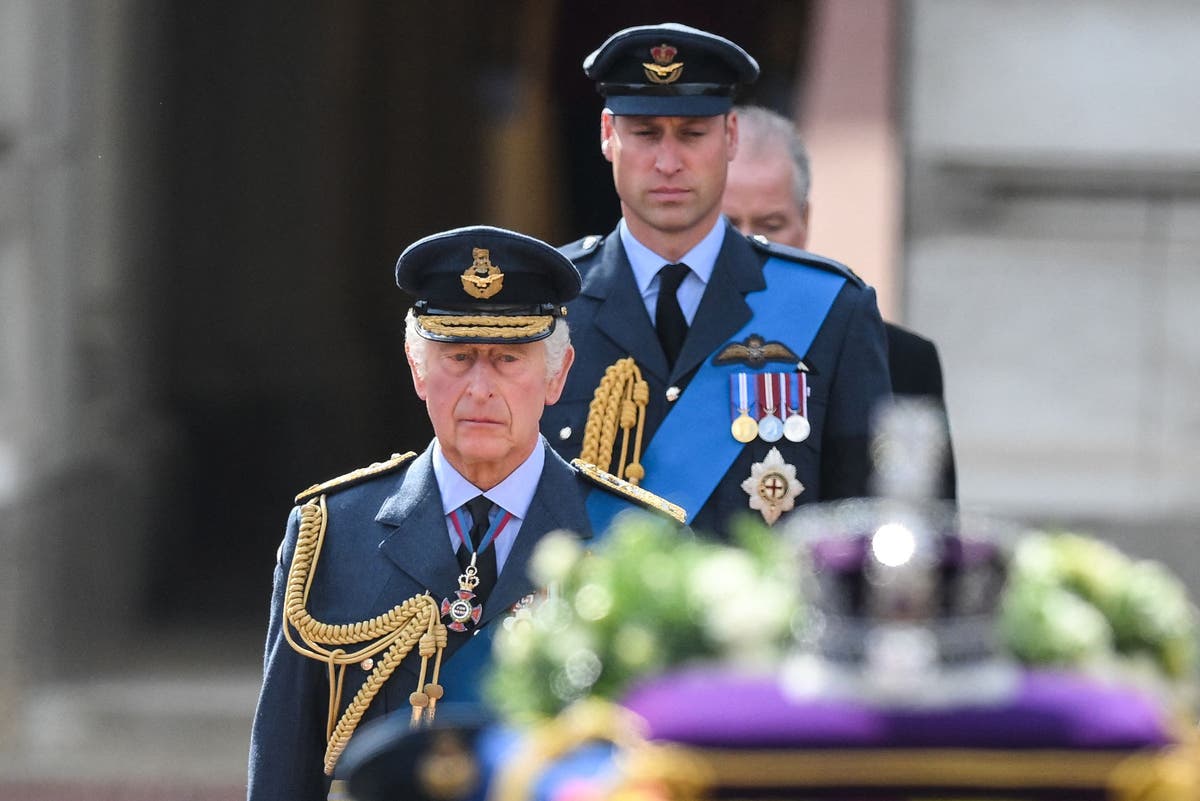 he Queen’s coffin has arrived at the Palace of Westminer after a sombre procession from Buckingham Palace.

The procession saw the Queen’s coffin leave the palace at 2.22pm. Crowds lining the streets occasionally burst into spontaneous applause or cheers.

The coffin, which had been followed by the King with his three siblings – Princess Anne, Prince Andrew, and Prince Edward, arrived at Westminster Hall shortly after 3pm.

Princes William and Harry were also in attendance.

The Queen’s lying in state begins at 5pm, continuing until 6.30am on Monday – the day of the Queen’s funeral.

The Queen’s coffin has been placed on the catafalque in Westminster Hall to lie in state until Monday morning.

Justin Welby, the 105th Archbishop of Canterbury, is leading prayers and a short sermon.

The Duchess of Sussex is driven behind the coffin

Soldiers, now wihout their helmets, are carrying the coffin inside as royals follow on.

The coffin was brought into the estate via the Carriage Gates entrance and passed through New Palace Yard, which features at its centre a fountain to commemorate the Queen’s Silver Jubilee.

Reminders of the Queen’s long reign feature all around New Palace Yard.

In addition to the centre-piece fountain, two lampposts stand marking the Queen’s Platinum Jubilee and the outdoor area is overlooked by the Elizabeth Tower in one corner, which was previously called Clock Tower but was renamed for the Diamond Jubilee.

The coffin has now reached Westminster Hall and is being carried inside on the shoulders of guards.

Crowds on Parliament Street were eagerly waiting for the procession to walk past.

People could be seen standing on a raised part of the His Majesty’s Revenue and Customs’ building.

The windows and balconies along the street were also filled with onlookers.

The guards and royals continue along Whitehall

Crowds wipe away tears during procession

A number of people could be seen wiping away tears as the Queen’s coffin made its way down The Mall.

Members of the public held up their phones to film and take pictures of proceedings, with a number standing on their tip-toes to catch a glimpse of the procession.