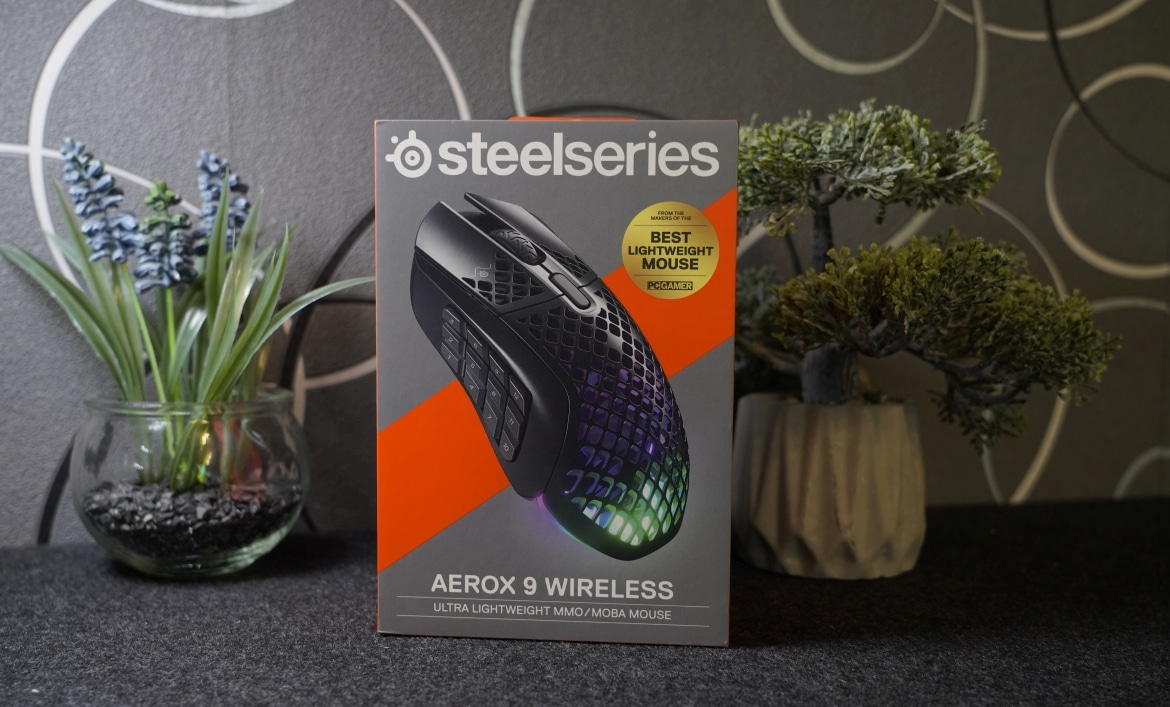 Why have five programmable buttons when you can have 18? If you like playing MMORPGs or MOBA games, you will appreciate the benefits of having many buttons. After all, actions, spells or entire attack rotations can be called up via mouse click, which would normally require a lot of inputs. The manufacturer SteelSeries has now also recognized this and, after the lightweight Aerox 3 (our review) and the wireless Aerox 5 (our review), is now launching a special MMO and MOBA mouse. Our SteelSeries Aerox 9 Wireless review explains what it has in store.

With the exception of the design, the new SteelSeries Aerox 9 Wireless shares many similarities with the Aerox 5. After all, both gaming mice were announced together in April 2022, but cover completely different areas of use.

However, since I was just able to test the 5, “number 9” has to stand up to a direct comparison within the Aerox family. There are no differences in the scope of delivery: In addition to the mouse itself, the Danish manufacturer includes a fabric-covered USB-C to USB-A cable with a length of two meters, a USB-C to USB-C range extender and the USB-C wireless dongle in the orange-gray box. Okay, we don’t want to leave out the obligatory manual either, of course.

Especially handy if you’re already part of the manufacturer’s ecosystem: The dongle is compatible with all wireless peripherals from SteelSeries. For example, if you use a headset, keyboard and mouse, you only need one USB dongle.

From the top, from the right side and in large parts also on the bottom, SteelSeries Aerox 9 Wireless and Aerox 5 are almost like two peas in a pod. Offered is the same ergonomic design for right-handed users, the same matte black ABS plastic finish, and even the same number of honeycomb-shaped holes that extend to the primary keys. Okay, I admit it: I didn’t count the holes by hand now.

However, the resourceful observer will notice that the manufacturer’s logo can be seen at the bottom of the Aerox 9 under the hood, which is missing on the Aerox 5.

On the underside, the differences are also limited: The shape, color and size of the sliding feet are congruent. However, the mode switch on the Aerox 9 is located in the lower third, while on the Aerox 5 it is in the upper third. You can also use it to turn the device on and off on this gaming mouse, as well as switch between 2.4 GHz wireless and Bluetooth operation.

In addition, the “wings” on the sides in the rear area are slightly larger, which results in – in my eyes – slightly better ergonomics. In my opinion, the SteelSeries Aerox 9 Wireless feels a bit better in the hand. Nevertheless, the dimensions are exactly the same.

As a real MMO/MOBA mouse, the Aerox 9 has twelve numbered and freely configurable buttons that protrude slightly from the case. Another unique feature is the scroll wheel, which is a four-way mouse wheel that you can not only click or move up and down, but also to the left and right to perform additional actions.

The workmanship of the SteelSeries Aerox 9 Wireless

There is not the slightest thing to complain about the build quality of the gaming mouse. As is usually the case with the manufacturer, it leaves an excellent impression in the SteelSeries Aerox 9 Wireless review.

Despite the holey design, the mouse looks very robust, while the matte finish skillfully keeps fingerprints away. Of course, SteelSeries’ in-house AquaBarrier technology is also in the mix, protecting the mouse from dust, dirt, oil and many other environmental influences thanks to IP54 certification.

The extensively customizable RGB lighting in a total of three zones has also been adopted from the other models. You can adjust this individually for each zone via the accompanying software and also add a reactive effect. The same annoyance as with the Aerox 5: Due to the closed sides, you unfortunately don’t see anything of the color play when your hand is on the mouse.

Sensor and field test of the SteelSeries Aerox 9 Wireless

We also already know the sensor of the SteelSeries Aerox 9 Wireless from the Aerox 5, where the TrueMove Air developed together with PixArt could already shine thanks to a resolution of 18,000 CPI, a maximum mouse speed of 400 IPS and a mouse acceleration of 40G.

Accordingly, the MMO mouse also whizzes across the mouse pad or desk at breakneck speed and precisely implements our inputs with a sampling rate of 1000 Hz. The 9 model has also inherited the excellent and pleasantly tactile mechanical switches of the two primary buttons.

The pressure point of the twelve side buttons is a bit harder. However, this ensures that you don’t accidentally press one of the buttons. Ergonomically, the Aerox 9 is also ahead.

Although the mouse is primarily designed for the palm grip style according to the manufacturer, I also found it very comfortable to use with a claw or fingertip grip. Despite my comparatively small hands, I can comfortably reach all of the side buttons without having to reach around – this was no different with the Aerox 5.

Now an MMO and MOBA mouse is truly no longer a novelty. Razer already paved the way with the Naga series many years ago and Corsair also struck a similar note with the SCIMITAR RGB Elite (our review).

Yes, even SteelSeries once ventured into such a gaming mouse with the Rival 500, albeit with a rather tentative approach. The new SteelSeries Aerox 9 Wireless is closer to the real MMO mice and, like the Razer Naga X, does without a modular design.

However, the Aerox 9 combines many advantages that the direct competition does not offer. It is significantly lighter than most other representatives, offers higher-quality mechanical switches, works wirelessly (and that optionally even in wireless mode or via Bluetooth to smartphone or tablet) and offers a not quite as extreme shape as some competitors.

Whether that makes it the best MMO and MOBA mouse is hard to say. However, I personally was absolutely thrilled with it during the test. I love the feedback of all the buttons and can understand what the benefit of an MMO mouse is.

Even though my online role-playing days are long since numbered, it’s very handy to be able to trigger up to twelve abilities with just one click, or – thanks to macros – to start the entire rotation at the touch of a button. The four-way mouse wheel is certainly a nice extra for those who use such things.

I rather don’t belong to them. However, this also offers a tactile and precise pressure point, so you won’t accidentally trigger a click when you actually wanted to move the scroll wheel to the left or right.

In terms of connectivity, the SteelSeries Aerox 9 Wireless leaves little to be desired. In combination with the USB-C receiver, the gaming device transmits wirelessly in the 2.4 GHz standard with almost no delay thanks to Quantum 2.0 technology.

Alternatively or additionally, the gaming mouse can also be connected to another device via Bluetooth, regardless of whether it is a smartphone, tablet, notebook or similar. Then, it is not quite as latency-free, but still fast enough for the majority of users.

I haven’t really tested the mouse on a smartphone or tablet, but I could well imagine that the Aerox 9 could be an advantage in games like League of Legends: Wild Rift or Arena of Valor.

As far as battery life is concerned, there are also positive things to report. Around 80 hours in wireless mode and up to 180 hours in Bluetooth mode are possible before the mouse runs out of breath. A full charge takes less than an hour, and you can of course continue to use the Aerox 9 Wireless with the charging cable connected.

In any case, the dual connectivity is extremely useful if you regularly switch back and forth between two systems.

As always with the manufacturer from Denmark, the combination of SteelSeries GG together with the Engine software contained therein is also used in this case, which scores with a clear and well thought-out layout.

The settings options extend to two categories in it: Mouse settings and lighting. You can set the latter separately for all three zones and create your own personal effects with the sliders.

However, the mouse adjustments are much more extensive. Apart from the possibility to customize all 18 buttons completely freely and provide them with functions, markos and much more, you can also adjust the five preset CPI levels.

These actually end at 3,200 CPI by default, offering only a fraction of what the SteelSeries Aerox 9 Wireless is capable of. The feature set is rounded out by customizable power-saving options, fine-tuning of acceleration or deceleration, a polling rate setting, and angle snapping.

The new SteelSeries Aerox 9 Wireless goes head-to-head with the Razer Naga Pro for the crown of best MMO and MOBA mouse. Both rodents offer some similarities, but differ in the details.

For example, the Razer mouse’s sensor has a higher resolution, and the Naga Pro is more customizable thanks to interchangeable side panels. On the other hand, the Aerox 9 Wireless has the edge in terms of connectivity (thanks to Bluetooth), build quality and significantly lower weight. Personally, I also like the ergonomics of the new SteelSeries gaming mouse better.

In any case, the Aerox 9 doesn’t make any slip-ups and impresses with outstanding mechanical switches, a precise sensor and a long battery life. So if you’re looking for a new gaming mouse and mainly play MMORPGs or MOBA, you’ll definitely be happy with the Aerox 9. So is it now the ultimate MMO and MOBA mouse? Yes, in my opinion at this point in time it is.

If you are looking for a gaming mouse with many buttons for MMOs or MOBA games, you will be excellently served here. Design, workmanship, ergonomics and functionality are outstanding.

By purchasing via the links from our price comparison, you support our editorial work without incurring additional costs. We thank you for your support.