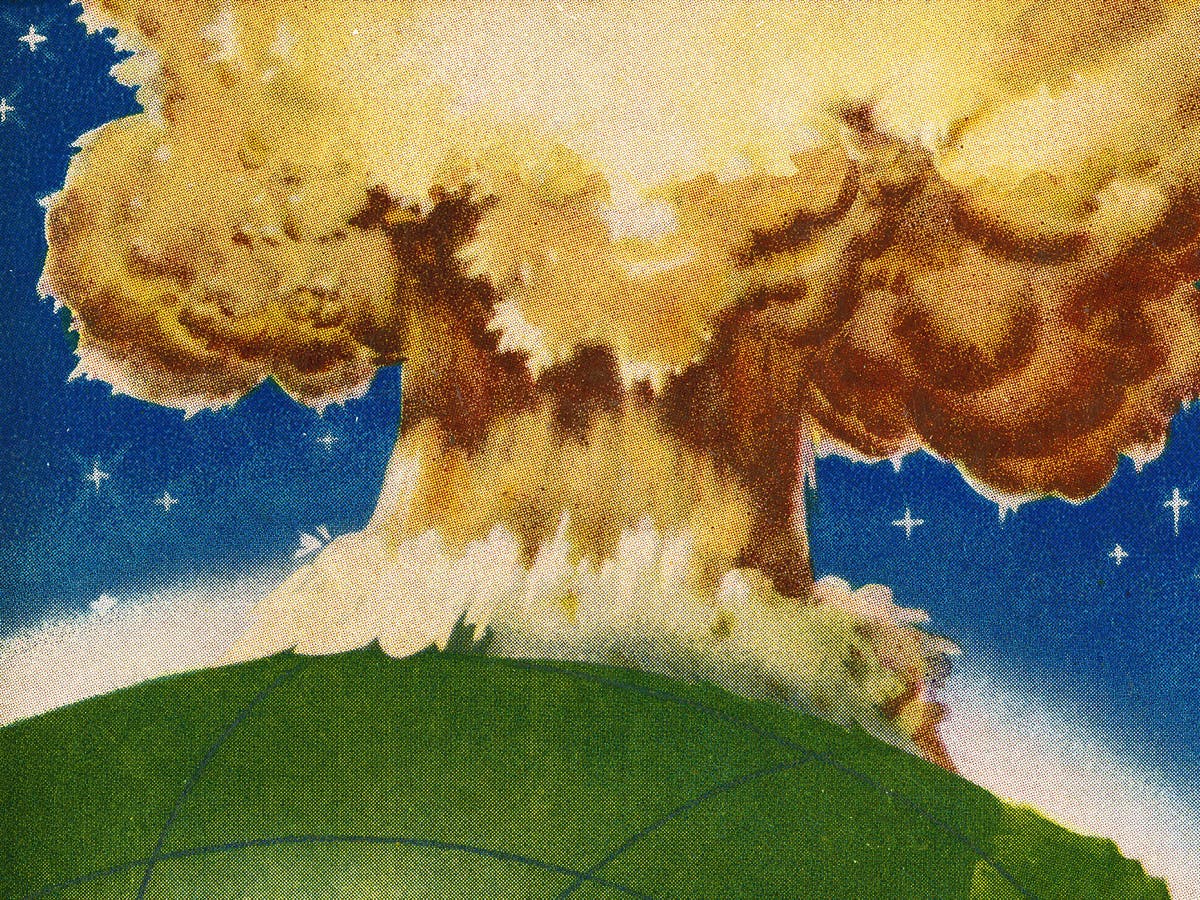 If readers of Saturday’s Telegraph were hoping for light relief from the Tory leadership election, they would not have found it in their newspaper’s comment pages. “The West should prepare for the real risk of nuclear war,” read a headline atop a column by weapons expert Hamish de Bretton-Gordon.

We live in very dangerous times, De Bretton-Gordon argued. He cited tension over Taiwan; Iran and North Korea’s progress in developing nuclear arms; and Vladimir Putin’s threats, veiled and not veiled whatsoever, of using nuclear weapons against Ukraine and Nato. The war in Ukraine also poses the risk of an accident – “or worse” – at Zaporizhzhia, the nuclear power station currently occupied by Russia. “If we do not contain these threats,” wrote De Bretton-Gordin, “everything else vexing us at the moment will prove horrifically irrelevant.”

So if Britain is to prepare, what preparations ought to be made? Paul Ingram, of the University of Cambridge’s Centre for the Study of Existential Risk, tells me what the government should be doing to mitigate the harm caused by detonations here or elsewhere. Ingram has just returned from the Nuclear Non-Proliferation Treaty Review Conference in New York, where Russian diplomats, he says, “have spent a lot of time trying to change the way in which their statements earlier this year are to be interpreted, and they’re trying to describe them as warnings rather than threats”.

This is a good sign, says Ingram, who for twelve years (2007-2019) was the executive director of the transatlantic British American Security Information Council. There is room, he says, “for a conversation about nuclear rhetoric moving forward” – dialogue that might lower the temperature somewhat.

Ingram is concerned about Russia using nuclear weapons in response to severe military losses; in Nato’s step-ups in the delivery of sophisticated weaponry, he sees escalation. “Any escalation increases the risk.” That risk, he says, “is not imminent, but it is bubbling away behind the scenes.” It is “low-probability, but the impact is so high that I think that the government does need to be preparing.”

The government’s most important task, Ingram says, is to avoid escalating that risk. Beyond that, a good first step would be to weigh up the probabilities of detonations here (which would have immediate, catastrophic impact) and abroad (which would affect us indirectly, potentially through a nuclear winter that would damage crops worldwide.) “It’s really difficult to get a clear handle on probabilities,” says Ingram. “It’s easier to get some kind of a handle on consequences. But a judgement is needed on those probabilities.”

Those probabilities, difficult as they would be to calculate remotely accurately, would give an indication of the level of investment that should go into preparing. Ingram uses food supply as an example. “Should we be storing lots of food now? That’s problematic, because that will lead to all sorts of food wastage. But equally, there does need to be some question about a variety of different catastrophes that will require some kind of food stock storage in our response. The government needs to be thinking about that and weighing it up in a reasonable way.”

Another early priority, says Ingram, should be deciding who is responsible for what. “That was a really big hole in the response to Covid,” he says. “It was incredible, really, because the risk of a pandemic was right up there as a top-tier security threat, and yet government departments had no clear idea of who was responsible for what activities and what sort of lines of communications needed to be opened.”

This must not be repeated in the event of a nuclear detonation, says Ingram. “Across critical services, infrastructure and government departments, the government needs to be clear about where responsibilities lie and then have response plans drawn up for the event.”

It is generally presumed that the Ministry of Defence bears these responsibilities. “But the Ministry of Defence is not going to be the department that is first-responding, or providing health responses or other emergency responses. It’s not going to be the department responsible for feeding everybody, or for sanitation, or whatever.”

When asked in March about their contingency preparations, shortly after the beginning of the war in Ukraine, government departments deferred to No 10. But it is easy to imagine the Department for Environment, Food & Rural Affairs being an appropriate candidate to lead contingency planning for food. Or the Department for Business, Energy and Industrial Strategy, being called on to ensure that our power supply is resilient in the face of catastrophe. “And there would need to be somebody, or a team, responsible for clean water, because water is quite a critical issue post-nuclear exchange because of [radioactive] contamination,” Ingram says. “There would need to be some kind of system for coordinating health responses. And there would need to be a system for rationing all of this, because the need will be much greater than the supply. There’ll be quite tough choices to be made.”

Local governments, Ingram says, “would need to play quite a central role in any response. There needs to be a clear-eyed perspective of what their capacity is likely to be. In those areas where there are actual detonations going off, I think we can assume that local government and any public services would be completely overwhelmed. But there will be other parts of the country that are not directly experiencing those detonations, and they are going to need to mobilise and pull people together and consider what essential services are needed in those circumstances and how they might be provided.”

There will need to be an evacuation plan, to whisk people away should an attack appear imminent. These evacuations would be enormous and time-restricted, posing huge logistical problems. We could learn from the Americans, says Ingram. “They have much more sophisticated plans around evacuation of cities in a variety of different contexts.”

Britain built many nuclear bunkers in the Cold War, a strategy in which Finland – which borders Russia and fears its aggression – has invested vast sums. Finland’s civil service says that its underground network of tunnels could easily accommodate Helsinki’s 630,000-strong population. Ingram, however, sees bunkers as “an individualistic approach. I think we need to be thinking much more in terms of resilience within communities”.

The assumption in large, nuclear-armed states such as our own, says Ingram, is that there’s little we can do to prepare for an all-out nuclear war. That shouldn’t inhibit us from preparing for war elsewhere, though. (South Asia is sometimes cited as a risky area: India, which has nuclear weapons, has fraught relations with China and Pakistan, also both nuclear-armed.) The domestic responses to that sort of situation, says Ingram, would still need to be rapid and significant. “They’re going to be different from the ones we’ve been talking about around evacuation and the rest of it. It’ll be much more about trying to secure food supplies and maintain critical infrastructure in the really challenging time when the sun is going to be much reduced” – nuclear blasts would kick soot and dust into the atmosphere, dimming sunlight and causing nuclear winter – “and food suppliers are going to be much curtailed.”

As for attacks directly on Britain, says Ingram, a public information campaign would be premature. Now is not the time to be supplying every British citizen with packs of potassium iodide, nor to be sending households pamphlets (of the kind distributed in the Sixties) containing advice on what to do in the event of an attack. “But if things start to get hairy – and we do have the Russians making significant threats – and there don’t seem to be clear and obvious ways out, I think the government does need at that stage to be considering public information campaigns.”

Writing those letters – choosing the last act of a nation, and whether or not that act will be to turn the other cheek – is perhaps the most solemn duty of a prime minister. Come September, when one of Rishi Sunak and Liz Truss assumes office, a new set of letters will be required. When the new prime minister puts pen to paper, they might reflect on what other preparations they might make for nuclear war. And they’ll probably require more than a two-minute scribble.