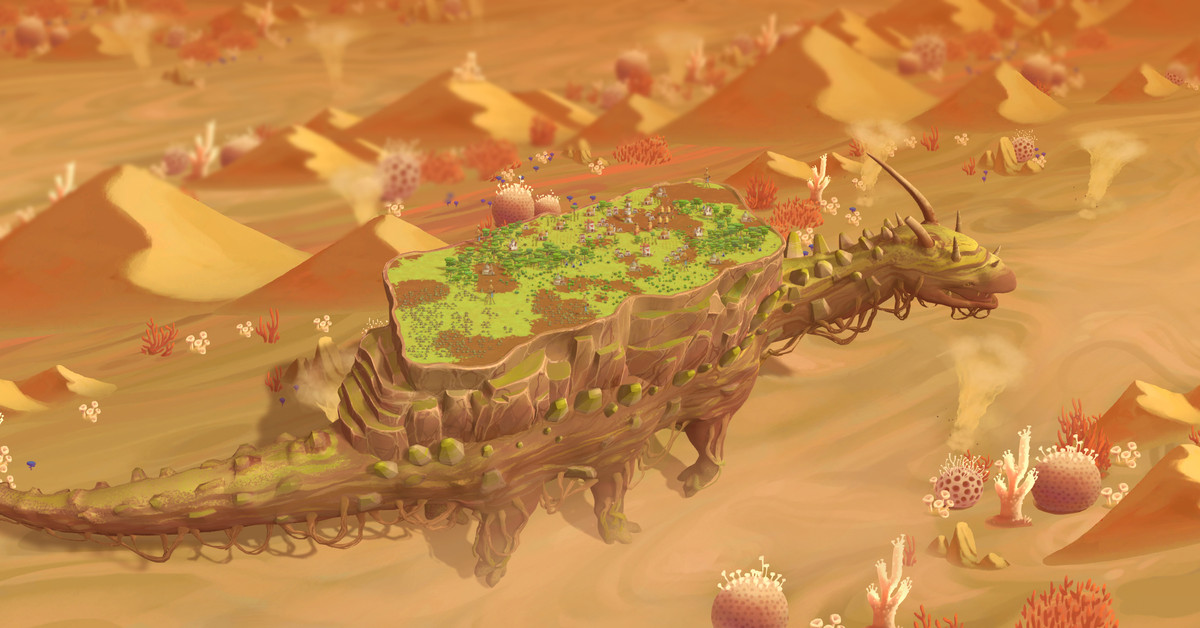 Village-building sims often open in a familiar way: They task you with gathering resources to craft and build structures. This is why I told my villagers to harvest Onbu’s spike, which yielded 30 stones. It seemed like a smart decision at the time, except for the tiny fact that I hadn’t read the fine print, and thus hadn’t realized it would make Onbu trust me less. We were off to a rocky start.

In The Wandering Village, you have to build a town that can survive the end of the world. Groups of nomads attempt to weather a ravaged Earth with toxic environments that can no longer sustain life. Your new home is on Onbu, a Hayao Miyazaki-esque, primordial creature that happens to have a large, habitable space on its back. As Onbu traverses the game’s world, you must adapt the village to environmental challenges while supporting a growing number of survivors. The game, which is now in Steam Early Access on Windows PC, Mac, and Linux, feels surprisingly polished — though it has some clear space to grow.

Onbu is nearly always on the move. As it trundles, it brings the village on its back through various biomes that affect farming and land toxicity. Deserts decrease water production and cold, mountainous regions slow crop growth. Toxic air pockets cause Onbu’s land to rot, killing plant life. It feels a lot like Timberborn or Don’t Starve, in which seasonal changes require players to adapt in order to survive. But in The Wandering Village, challenges don’t come at a regular seasonal clip. Instead, players can see where Onbu is headed via an overworld map, and attempt to issue commands to the lumbering creature. It adds another strategic layer that necessitates planning on an additional plane, not unlike XCOM 2 or Wildermyth.

This means building a relationship with Onbu, who initially won’t trust you… especially if you rip out its rocky spikes. If you build a hornblower facility, a villager can attempt to tell Onbu which way to go at a crossroads: Go toward the grass and not the toxic pit, Onbu, please! I think as I try and fail. Onbu’s reaction is dictated by its trust in you. Onbu might assent to a call, but my Onbu likes to go in the opposite direction like a sulking child. You’ll also need to feed the colossal creature, which means you get to see a cute animation of a trebuchet launching a food ball into its mouth. You’ll also need to find Onbu places to sleep, or it might sleep in a bad place, like in the middle of a hurricane. Survival my ass.

Environmental shifts are more forgiving than I expected. If Onbu heads into the desert it’s simple enough to pivot from beets, which have no heat tolerance, to corn, which thrives in high heat. It’s mostly a balancing act between village and Onbu management, and much of this is facilitated through the game’s research trees. For example, you’ll want to research a decontamination facility to manage toxic land, but you’ll want to research an Onbu doctor to help the creature heal from its own poison intake. While this trade-off adds a layer of complexity, the game could add to its town management aspects, either through more options for responding to biome changes or through adding more detail to city building via pathing type or automation options.

Research trees ultimately reveal two approaches: Build trust with Onbu, or mercilessly harvest and manipulate Onbu. In the current version, the stakes don’t feel high enough to do anything but live peaceably with the large creature that is your home. In Frostpunk, I don’t make my workers eat sawdust gruel because I’m a sicko (well, maybe a bit); I do it because it’s eat sawdust gruel or die. I cannot imagine acting with cruelty to gentle, if implacable, Onbu. Nor does the game rely on humor to mask its horrific acts as in Cult of the Lamb’s cute animals and humorous animations, even in the case of ritual sacrifice.

Even in early access, The Wandering Village is shaking up the familiar city management simulator formula. I’m interested in seeing where it all lands.

The Wandering Village went into Steam Early Access on Sept. 14 on Windows PC, Mac, and Linux. The game was reviewed on Windows PC using a pre-release download code provided by Stray Fawn Studio. Vox Media has affiliate partnerships. These do not influence editorial content, though Vox Media may earn commissions for products purchased via affiliate links. You can find additional information about Polygon’s ethics policy here.

A weekly roundup of the best things from Polygon