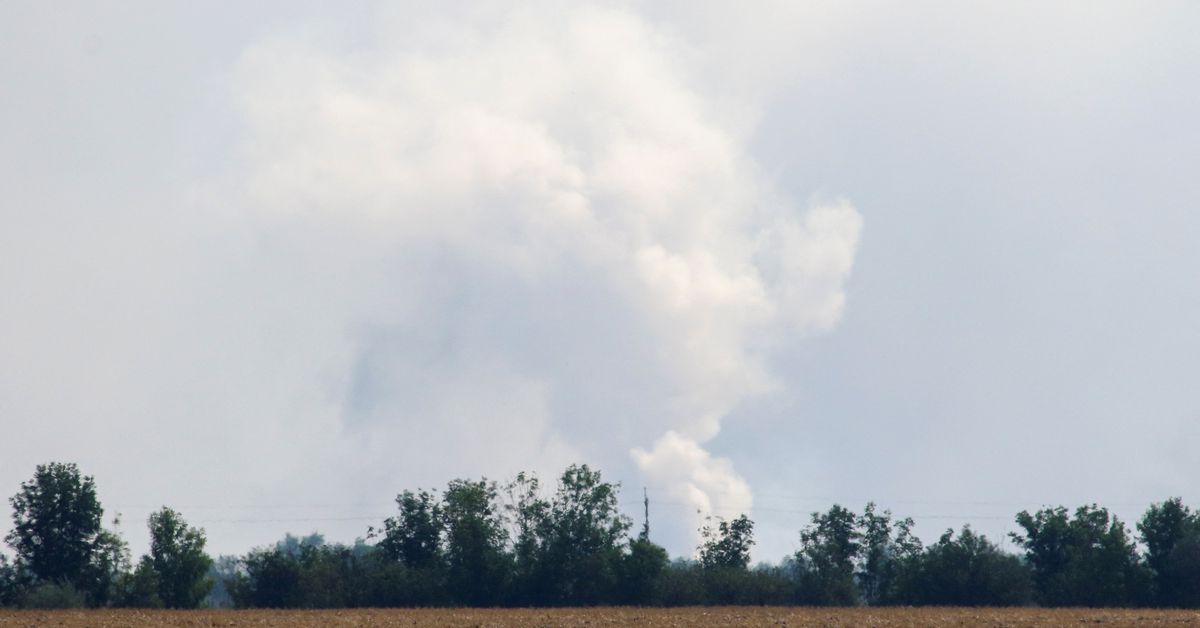 KYIV, Aug 18 (Reuters) – Ukrainian forces said on Thursday they had beaten back a Russian attack in the southern region of Kherson, while shelling by Kremlin forces in Kharkiv in Ukraine’s north killed seven people as the near six-month war grinds on with no let up in fighting.

They will discuss finding a political solution to the conflict with Russia and address the threat to global food supplies and risk of a disaster at Europe’s largest nuclear power plant, which has been taken over by Russian forces. read more

The war has caused millions to flee, killed thousands and deepened a geopolitical rift between the West and Russia, which says the aim of its operation is to demilitarise its neighbour and protect Russian-speaking communities.

“Russian forces have achieved only minimal advances, and in some cases we have advanced, since last month,” Ukrainian presidential adviser Oleksiy Arestovych said in a video. “What we are seeing is a ‘strategic deadlock.'”

“This is a devious and cynical strike on civilians with no justification,” Zelenskiy said on the Telegram messaging app.

In the south, Ukrainian forces routed an attempted advance by Russian forces near the town of Bilohirka, northeast of Kherson, Ukrainian military analyst Oleh Zhdanov said.

The south district of the Operational Command of the Ukrainian armed forces said Ukrainian forces killed 29 “occupiers” as well as destroying artillery, armoured vehicles and a military supply depot.

Reuters was not able to independently confirm the battlefield reports.

The United States, Albania, France, Ireland, Norway and Britain have asked the U.N. Security Council to meet on Aug. 24 to discuss the impact of the war in Ukraine, diplomats said, marking the six-month anniversary of Russia’s invasion.

A view shows smoke rising above the area following an alleged explosion in the village of Mayskoye in the Dzhankoi district, Crimea, August 16, 2022. REUTERS/Stringer

A series of blasts at military bases and ammunition depots in the past week in Crimea, the Black Sea peninsula annexed by Russia in 2014, has suggested a shift in the conflict, with Ukraine apparently capable of striking deeper into Russian-occupied territory.

Moscow has blamed saboteurs for the attacks, while Ukraine has not officially taken responsibility but has hinted at it.

Ukrainian military intelligence said in a statement that after the recent explosions in Crimea, Russian forces had urgently moved some of their planes and helicopters deeper into the peninsula and to airfields inside Russia. Reuters could not independently verify the information.

On Wednesday, Russia’s RIA news agency cited sources as saying the commander of its Black Sea fleet, Igor Osipov, had been replaced with a new chief, Viktor Sokolov. read more

If confirmed, the move would mark one of the most prominent sackings of a military official so far in a war in which Russia has suffered heavy losses in men and equipment.

The Black Sea Fleet, which has a revered history in Russia, has suffered several humiliations since President Vladimir Putin launched the invasion of Ukraine – which Moscow calls a “special military operation” – on Feb. 24.

In April, Ukraine struck Russia’s flagship the Moskva, a huge cruiser, with Neptune missiles. It became the biggest warship to be sunk in combat for 40 years.

Crimea provides the main supply route for Russian forces in southern Ukraine, where Kyiv is planning a counter-offensive in coming weeks.

The Black Sea Fleet has also blockaded Ukraine’s ports since the start of the war, trapping vital grain exports, which are only now starting to move again, and sending global food prices soaring. read more

The government in Kyiv has said it hoped to increase the monthly volume of sea exports to 3 million tonnes in the near future in order to clear a backlog of 18 million tonnes of grains left over from last year’s harvest and start selling new crops.