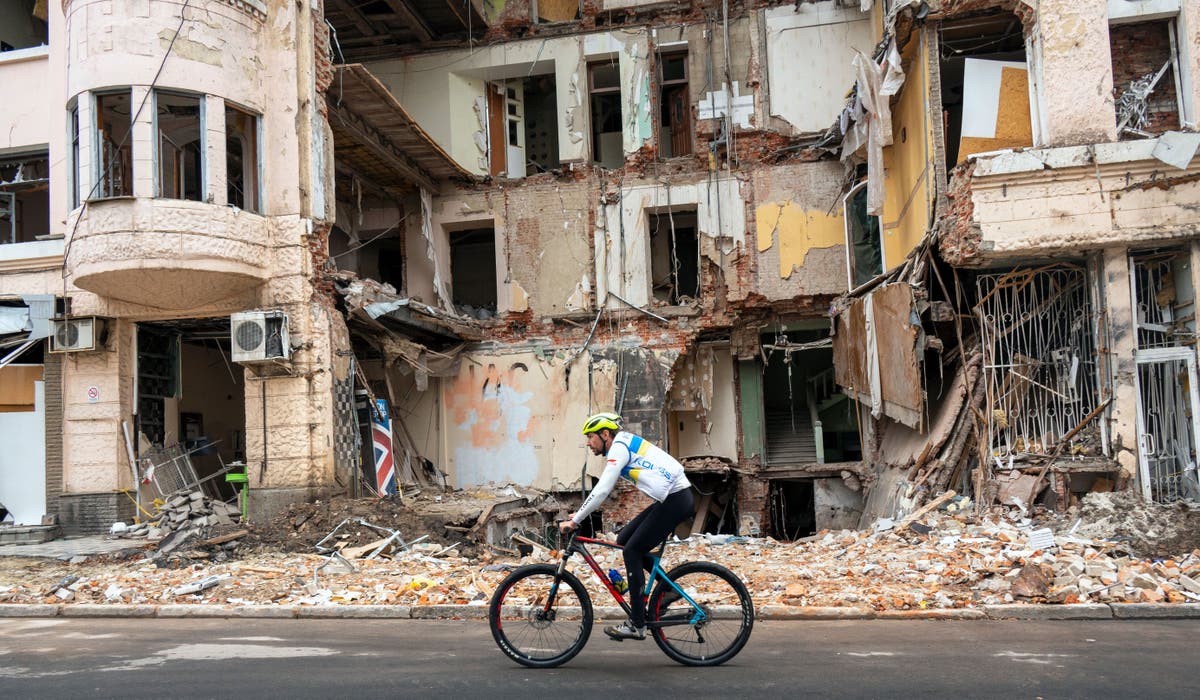 The Kremlin is “almost certainly” sourcing weapons from Iran and North Korea as it struggles with supply shortages, the British Ministry of Defence (MoD) has said.

Defence experts believe the Russian army has been forced to buy from the pariah states in part because of the impact of Western sanctions.

“Russia has highly likely deployed Iranian uncrewed aerial vehicles (UAV) in Ukraine for the first time,” the MoD said in a military update on Wednesday.

Its report comes the day after Ukrainian officials said their forces had shot down on Iranian-made drone in the Kharkiv province, where Kyiv has seen spectacular success in recent days.

After Ukraine liberated a swathe of the northeast region, accounts of Russian torture have emerged.

A resident from the city of Balakliya told the BBC he was held captive by Russians and tortured with electrocution.

Ukrainian president Volodymyr Zelensky said his troops have recaptured about 8,000 sq km of land this month.

Zelensky thanks troops in Kharkiv region

His troops took over the town a few days ago after pushing back the Russian army.

“The president of Ukraine thanked the soldiers for liberating Ukrainian lands, and solemnly raised the Ukrainian flag over the city council,” the 25th Separate Airborne Sicheslav Brigade said on Facebook.

Retreating Russian troops in Kharkiv accused of torture by Ukrainians

Russian troops have been accused of torturing Ukrainians in Kharkiv provinces, swathes of which have recently been retaken by Kyiv.

Retreating Russian troops in Kharkiv accused of torture by Ukrainians

Ukraine officials say they will seek evidence of alleged crimes

A lightning Ukrainian counterattack has seen Russian troops flee from their positions in Kharkiv province.

Here are some images from territory Ukraine has recaptured:

Ukrainian soldiers are advancing close to the borders of the land claimed by separatist fighters in Luhansk province, a Russian-back commander has said.

Since 2014, pro-Russian troops have taken control of parts of eastern Ukraine, with the intention of wresting the entire Donbas region from Kyiv’s control.

However, a successful Ukrainian counteroffensive over the last week is pushing the new front line closed to the self-proclaimed borders, Andrey Marochko said.

Vladimir Putin rejected a deal one of his envoys brokered with Ukraine as the war began, sources have told Reuters.

It is thought that the Ukrainian-born envoy, Dmitry Kozak, obtained a provisional deal that satisfied the Kremlin’s desire that Ukraine never join Nato.

However, the Russian leader reportedly changed his mind, deciding he wanted to annexe swathes of Ukraine.

“After 24 February, Kozak was given carte blanche: they gave him the green light; he got the deal. He brought it back and they told him to clear off. Everything was cancelled. Putin simply changed the plan as he went along,” one Kremlin source said.

Responding to the story, Mykhailo Podolyak, an adviser to the Ukrainian president Volodymyr Zelensky, said: “Today, we clearly understand that the Russian side has never been interested in a peaceful settlement.”

The Kremlin has claimed that the Reuters exclusive is based on “absolutely incorrect information”.

The Biden administration has released a cable which suggests that Russia has spent $300 million over the last eight years on attempts to influence politicians and other officials in dozens of countries.

Taiwan is learning from Ukraine’s communications strategy, the country’s digital minister has said.

“We look at the experience of Russia’s invasion of Ukraine in February. We found that the whole world can know what is happening there in real time,” the Taiwanese digital affairs minister Audrey Tang said.

“It’s not only for our own people, but also for the people who care about us all over the world, so that we can enlist the assistance of international friends.”

The EU is not complete without some of its eastern neighbours, Ursula von der Leyen has said.

Ukraine, Georgia, Moldova and countries in the Western Balkans are part of the European family, she added.

“You are part of our family, you are the future of our union,” Ms von der Leyen said. “Our Union is not complete without you.”

The Kremlin has acknowledged its defeat in Kharkiv province, the first time it has been open about one of its setbacks in Ukraine, the Institute for the Study of War (ISW) has said.

In less than a week, Kyiv’s forces have retaken thousands of square kilometers of land in the northeast region.

Moscow tried to recast previous failures – including its withdrawal from areas around Kyiv this spring – as strategic decisions.

However, the approach to the Kharkiv defeat has been slightly different.

“The Kremlin’s acknowledgment of the defeat is part of an effort to mitigate and deflect criticism for such a devastating failure away from Russian President Vladimir Putin and onto the Russian Ministry of Defense (MoD) and the uniformed military command,” the ISW said.